An island of glass - the explosive history of Pantelleria, Italy

If you’ve heard of Pantelleria, it may be because you’ve seen A Bigger Splash, or read about it in a travel magazine extolling its yet undiscovered virtues (unless you are Madonna or Georgio Armani who have holiday homes there). If you’re a geologist, you may know the name from Pantellerite, the name given to peralkaline rhyolites, which are so abundant on the island. Or perhaps, the enigmatic mineral Aenigmatite, also known as Cossyrite after Cossyra, the ancient name of Pantelleria. What you may not know is that Pantelleria is an island of glass and has a history of catastrophic, caldera forming eruptions. Our recent work has pieced together the island’s explosive past in a new, comprehensive volcanic history. 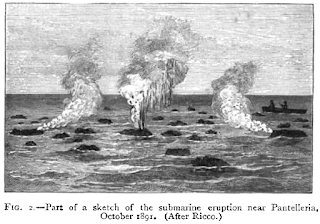 The last eruption to occur at Pantelleria was a submarine basaltic eruption that occurred 4 km NW of Pantelleria in 1891. The eruption lasted for 9 days and produced floating scoria bombs which eventually exploded and sank. But this gentle, effusive basaltic activity is not typical of the island’s history, instead the island more commonly erupts trachyte and rhyolite, regularly covering the island in volcanic glass of one form or another. For the last 46,000 years, eruptions have mostly been small (strombolian in scale) with local pumice fall deposits and lavas. Around 46,000 years ago, a large eruption occurred generating a hot,sticky pyroclastic density current which covered the island in a welded, rheomorphic ignimbrite known as the Green Tuff. The Green Tuff blanketed the island, and covered the older deposits. The older rock record was known to include eruptions of at least the same size as the Green Tuff, but as their deposits are best exposed in dramatic sea cliffs it has been difficult to piece together this story of explosive eruptions until now.


Our study brings together field volcanologists, palaeomagnetists and experts in radiometric dating to put together the complete story of the pre-Green Tuff eruptions. The field volcanologists carried out detailed studies of the rocks left behind by these older eruptions, interpreting the rocks in order to understand the processes that formed them. The palaeomagnetists used palaeomagnetic data as a correlation tool, to help match up some of the deposits where these couldn’t be easily traced in the field. Finally, we used Ar/Ar radiometric dating so that we know when the different eruptions occured.


We find that the island’s history is dominated by large ignimbrite-forming eruptions. Ignimbrites are the deposits of pyroclastic density currents; dramatic hot flows of gas, ash and rocks which can travel at speeds up to 450 mph (to learn more about ignimbrites and how we use them to reconstruct PDCs, read this blog). Some of the ignimbrites are related to eruptions which resulted in caldera collapse. This is where the magma reservoir underneath the volcano is evacuated so dramatically during an eruption that the roof of the reservoir collapses - the volcanic edifice disappears into the space created by erupting the magma. Caldera collapse eruptions are thought to be some of the biggest, most violent eruptions that a volcano can produce. We found that Pantelleria had experienced at least five of these catastrophic eruptions. The Green Tuff eruption is commonly thought to have ended with a caldera collapse event, but recent work suggests that this isn’t the case. These large eruptions occur every few thousand years up to a gap of around ~40 kyr - we found that there didn’t appear to be any cyclicity or pattern to the timing of the eruptions.


We also found that in between these large eruptions the island was far from quiet. Small scale eruptions were producing eruption columns that covered local areas with pumice, or perhaps generated small lava flows. These ancient small eruptions are very similar to the activity that has occured on the island since the Green Tuff. So then, is the island currently in a phase of activity so very different to the island’s volcanic past? Probably not. Studies on the last 46,000 years have suggested a decrease in eruptive activity, particularly in the last 15,000 years. But we cannot assume that no large, catastrophic eruption will occur in the future. Importantly though, there is no current evidence that an eruption is expected imminently.

A PDF is available at http://www.sciencedirect.com/science/article/pii/S0377027317300781; from the University of Leicester or Hull’s repository; or by emailing Nina Jordan or Rebecca Williams.
Posted by Unknown at 13:49 1 comment: