The Louisville mantle plume, responsible for creating a 4300 km chain of volcanoes is fixed with limited motion. This is the finding of a new study published late last year in Nature Geoscience, and is the result of a 2 month International Ocean Drilling Program (IODP) expedition (Expedition 330) to the SW Pacific Ocean in 2010, on which I sailed as an igneous petrologist. This blog takes us through why this is so important and how the study was completed.

The Louisville seamount trail is a chain of volcanoes that stretches for over 4000 km. The oldest volcano, which is right next to the Tonga-Kermadec Trench, is around 80 million years old. At the south-eastern end of the chain, the youngest volcano is thought to be around 1 million years old. The linear chain appears to have an age progression along its length, meaning that they get older as you go from the SE end of the chain towards the Tonga-Kermadec Trench. The volcanoes are also what we call ‘intraplate’ volcanoes, which means that they are not found on plate margins where we expect to find volcanoes, like around the Pacific Ring of Fire. All this suggests that the Louisville Seamount Trail is the result of hotspot activity and is the SW Pacific equivalent of the Hawaii-Emperor Seamount Trail. In fact, the Louisville chain trends in the exact same way as the Hawaii-Emperor chain.
Hotspots are thought to be stationary thermal anomalies in the mantle that may originate at the core-mantle boundary. These fixed points, and the trails of volcanoes that they produce, have been essential in our understanding of plate motions. For example, if the volcano chain is 1000 km long, and there is an age gap of 10 Ma between the south-eastern most volcano and the north-western most volcano, then we can infer that the plate has been moving over the hotspot at a rate of 1000 km per 10 million years, or 10 cm per year, to the north-west.
﻿

However, when the Emperor Seamount Trail was drilled during ODP (a former version of IODP) Leg 197, the scientists found that during a period between 50 and 80 million years ago, the Hawaii hotspot actually moved! In fact, its latitude changed by 15° over this time. So, if Louisville is a SW equivalent of Hawaii, did its hotspot move as well? Are hotspots really fixed or do they wiggle about? Was this movement caused by dynamics within the mantle – a mantle wind that would have displaced both the Hawaii and the Louisville plumes?

Expedition 330 was designed to test this hypothesis. From Dec 2010 to Jan 2011, the Joides Resolution drilled 5 seamounts of an equivalent age to the Emperor Seamounts which demonstrated plume motion. We drilled through 1068.2 m of rock, through thin sedimentary covers and deep into the volcanic succession. Record recovery rates (amount of rock recovered in core vs amount of rock drilled through) of 87.8% (72.4% average) meant that we had plenty of volcanic rocks to study. In order to test the hypothesis of plume motion, the palaeomagnetic inclination of the volcanic rocks and the age of the rocks were deduced.
﻿﻿﻿﻿﻿﻿When a hot rock cools (below the curie point), its magnetic minerals align to the magnetic field of the earth at the time it cools. The earth’s magnetic pole changes over earth’s history, so the alignment of the magnetic minerals will be different in different aged rocks. Palaeomagnetists can measure that alignment in the rock. If they analyse many rocks over a period of around 1 million years, these values for magnetic north should roughly average out to be the same as geographic north. If there is still an inclination in the value they get, this must be due to the latitude at which the rocks formed. We can date these rocks using a technique called radiometric dating (40Ar/39Ar) so we know exactly how old the rocks are and look at any changes in inclination through time.
﻿

Right now, the Louisville hotspot is at 50°26’S and 139°09’W. Rocks from four of the seamounts we drilled were studied: Canopus Guyot, (74 Ma) Rigil Guyot (70 Ma), Burton (64 Ma) and Hadar Guyot (50 Ma). It was found that Rigil Seamount has an average palaeolatitude of 47.0° S (+10.5°/-5.6°) which is comparable to the current location of the Louisville hotspot at ~51°S, as are the estimates for the Burton and Hadar Seamounts. The oldest seamount, Canopus does have a lower palaeolatitude of around 43.9°S and this may mean that there was some motion towards the southwest at this time. The best estimates are that there has been limited 3-5° latitudinal movement of the Louisville plume since 70 million years ago. 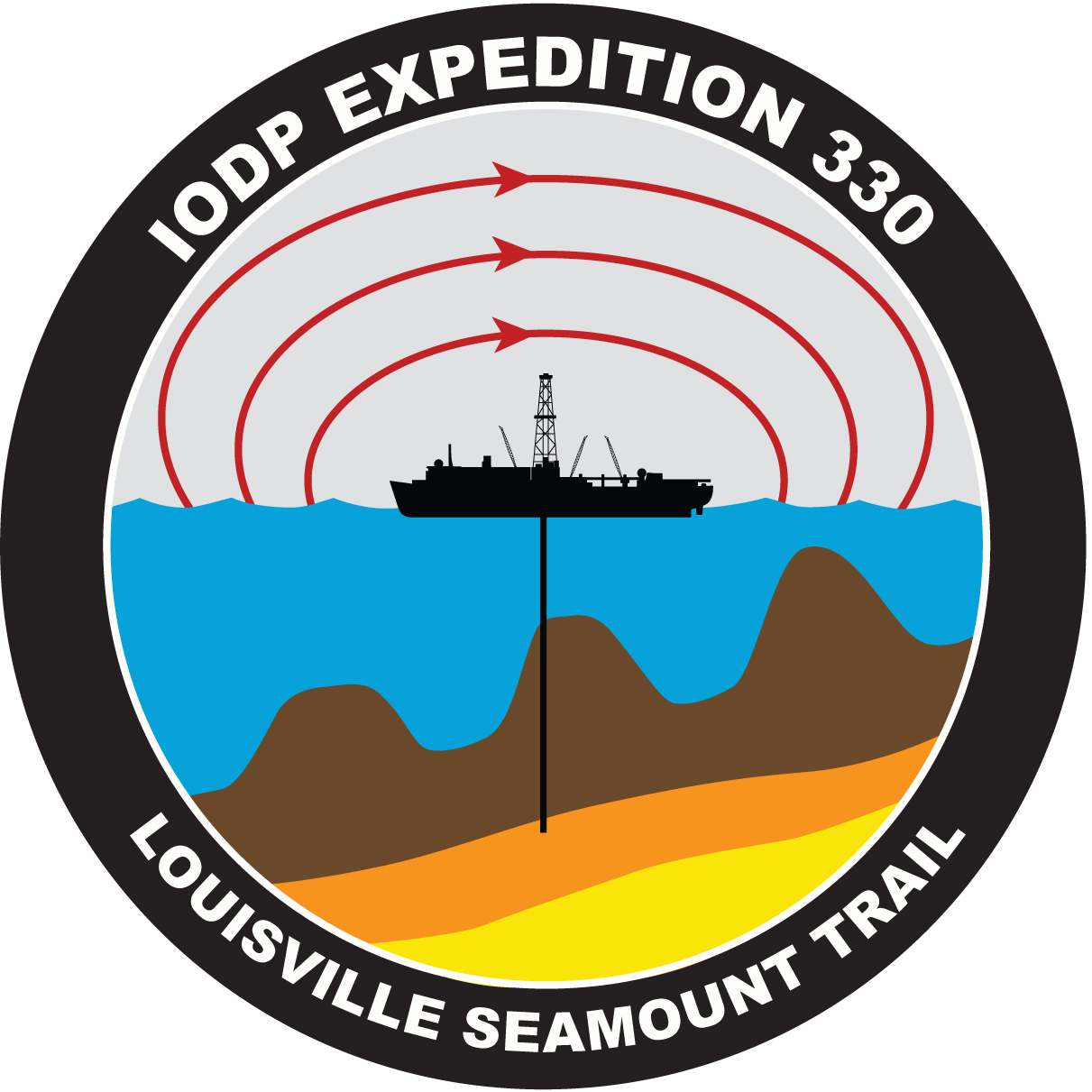 The study concludes that the Louisville plume is relatively fixed. When compared to the Hawaii plume, which had a rapid 10° southern shift during this time period, the Louisville plume had independent motion and there is no evidence for the proposed mantle wind. This means that, when considering plate motions, the shape and age progression of the Louisville seamount chain is a more robust dataset for calculating Pacific Plate motion, than the Hawaiian-Emperor chain. Since ODP Leg 197, the sharp bend in this chain has been reinterpreted to reflect the effect of plume motion, rather than a change in motion of thePacific Plate . The Louisville dataset now lends support to this.

Work is now ongoing by shipboard scientists to understand more fully the Louisville Seamount Chain. I, with a variety of co-authors, am characterizing the geochemical evolution of the chain and attempting to understand its mantle source by looking at its whole rock geochemistry and Hf (and Nd-Pb-Sr) isotope signatures. Watch this space for this research – I’ll blog on it as it’s published.

This blog is based on:

More information on the expedition can be found here:

The UK is a member of the international Integrated Ocean Drilling Program (IODP) as part of the European Consortium for Ocean Research Drilling (ECORD). It is funded as a NERC research programme. NERC supported 5 UK scientists to participate and carry out post-expedition research on Expedition 330.
Posted by Unknown at 11:00