This blog post is going to talk about the storm surge that swept along the east coast of the UK on the 5th December 2013, last week. Rather ironically, I was going to post about problems in predicting disasters and how we mitigate against these, but this seems more topical and worthy of a post., and I hope to give you a bit of an insight into how a GEES researcher responds to live events relevant to their field.

The surge seemed to catch everyone by surprise. I checked the forecast on the Monday as my in-laws were travelling to Hull from London to visit us on the 5th, and the Met Office app suggested Thursday was going to be quite nice, but a bit windy in the far North-East. The forecast did evolve over the week, but not so much to suggest the conditions that resulted in them passing at least five overturned lorries on their journey (two and a van on the Ouse bridge alone).

On Thursday afternoon, there were warnings of a storm surge – a temporary increase of sea level caused by low pressure and high winds – that would potentially flood coastal towns on the east coast. Our local news focussed on Grimsby and Cleethorpes as being the most likely to be hard hit. Hull was just at medium risk. Myself and Prof Coulthard (my boss) watched the tide rise on the Immingham tidal gauge and compared it to the data we held from the same site during the 1953 storm surge.

The 1953 storm is THE storm when talking about storm surges in the UK. It was big and it caused extensive damage and over 300 people lost their lives. This storm was being billed as ‘the worst since 1953’, yet to our astonishment we saw the tidal gauge go up and look increasingly like it was going to exceed the level recorded back then.

As we were leaving the office, around five thirty, the first warnings started coming in that Victoria Dock in Hull was at risk. I followed the story unfold on Twitter as photos popped up showing the first signs of water overtopping the defences. The Marina also flooded and water spilled out into the Kingston Retail Park, and the home of the Hull Stingrays and Hull’s most versatile venue, the Ice Arena. 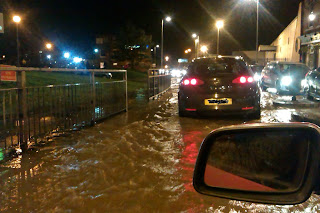 The City of Hull held its breath as high tide approached. Only the tidal barrier stood between the surging sea and thousands of properties in the flood plain of the River Hull behind. The tide crept ever upwards, lapping at the sides of the mighty barrier but could not overcome it. But it was close – only 40cm remained of that barrier, built to defend the city after the1953 surge. It had done its job, just. The tide height of 5.8m is a record high for Hull. 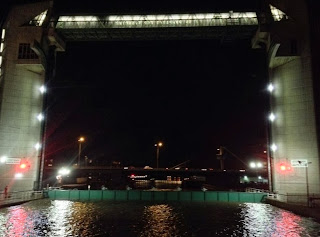 The Saviour of Hull! - The Tidal Barrier holds back the tide. Photo by @Tom_Coulthard (This is just one of many great photos).

The sea water eventually receded at Hull.  High tide was later in the inner estuary and badly flooded South Ferriby and Goole. The flooding continued further south, in Skegness and Boston. Another great tidal barrier, the Thames, was also needed to save large areas of East London.

Now that the waters have passed the data is beginning to be collected and analysed. What seemed to take everyone by surprise was the scale of it. Data from the Immingham gauge stopped when the level reached 8.5m*, but from the curve it looks like it would have continued to around 9.5m – 2m above the predicted astronomical tide (from the pull of the Sun and Moon), and over a metre greater than the highest reading from the 1953 storm surge (at 8.4m).

*I don't know why the gauge stopped, most of them did before high tide that night. My guess is that they either reached the top of their scale, or exceeded a threshold where it is assume too high to be accurate - The Immingham gauge stopped at around the maximum of the 1953 tide level.

This is very significant. I don’t think anyone anticipated it. As I said previously, 1953 was THE storm. For the last few months I have been working on a computer model to simulate the flows in the Humber, with one of the aims to be able to predict the estuary’s response to 1953-like events, especially in the face of rising sea levels. Much of the Humber’s defences were built after the 1953 surge so unsurprisingly the model showed they coped well. Our hypothesis was that the rising sea levels on top of that might cause them some issues, so we wanted to try and model that.

Naturally, first chance on Friday we ran our model with the tidal heights recorded on the evening before. Our model suggests that if we had been able to predict the scale of the surge we could have anticipated the flooding, even just based on this preliminary data (although a large pinch of salt is needed when interpreting the simulation below).

As bad as the flooding was, it has to be said that our infrastructure did a fantastic job. The scale of this surge was unprecedented, quite a bit bigger than 1953, yet there has not been the devastation, and thankfully, the loss of life that followed that storm. If it were not for structures like the Hull Tidal Barrier, it would have been much, much worse.

And that leaves us with a warning. The International Panel for Climate Change (IPCC), uses different models to try and predict future sea level rises for the next 100years, and the 'Best Case Scenario' - where greenhouse gas emmissions are cut immediately - would likely cause a sea level rise of 40cm. This is the capacity left over on the Hull Tidal Barrier. When we consider that an increase of 60-80cm is probably a better estimate, the ability of our infrastructure to manage this size of event in the future needs to be considered. It maybe that this storm surge is an event that won't be repeated in our lifetimes, but it now stands as THE storm we’ll be using the measure future resilience and it pushed us right to the edge.
Posted by Chris Skinner at 11:02