My PhD research focused on what policy makers could do to help support localised food systems (LFS).  Although LFS are difficult to define, the number of LFS has grown over the last 15 years as producers and consumers seek alternatives from mainstream, globalised food systems.  A widely used definition is:

“rooted in particular places, [LFSs] aim to be economically viable for farmers and consumers, use ecologically sound production and distribution practises, and enhance social equity and democracy for all members of the community” (Feenstra 1997)

My PhD research with policy makers, local food businesses and consumers in East Yorkshire (UK - an area usually seen as industrial farming) and the Abruzzo (Italy - the Abruzzo is often seen as marginal farming) explores how local food is contingent on specific localised spaces.  Using evidence from two contrasting types of region, one so-called industrial agricultural region and the other a more marginal region, helps to probe why some regions develop strong LFS while others do not.

Relating to food production, regions are frequently characterised as ‘marginal’ or ‘industrial’, but food production can be more complex.  Eastern England is often viewed as being devoid of LFS, as a homogeneous intensive agricultural region or a ‘placeless foodscape’ (Morgan et al., 2006).  Regions that have been marginal to the post World War II productivist agricultural regime are typically viewed as the stronghold for LFS, in the UK, for example, linked to areas like Devon, Cumbria and Wales.  Countries such as Italy and France are often viewed as favourable for LFS as a result of cultural attachment to local food (Montanari 1994).  Such stereotyped views may inhibit opportunities and developments in regions like East Yorkshire as well as in countries like Italy, by glossing over more detailed local variations.

Such stereotypes of ‘conventional’ or ‘peripheral’ are problematic as these opposite ends of a spectrum are not clear-cut, with a more nuanced picture emerging.  Policy support is essential for the success of LFS, yet how policy makers interpret and understand local food varies by regional context.  ‘Local food’ means different things in specific contexts.

East Yorkshire (UK) and the Abruzzo (Italy) were my case study regions for investigating LFS (see Figure 1).  Although they are diverse in many respects, similarities include the ways in which space affects the actions and thinking of core actors involved in local food and rural development.  East Yorkshire is an intensive agricultural region embedded into global commodity networks yet with an emerging local food sector, whereas the Abruzzo is the type of area frequently associated with strong LFS.  Italy per se is associated with a strong food culture, assumed to have high levels of commitment to local food (‘prodotti tipici’) (Helstosky 2004; Montanari 1994). 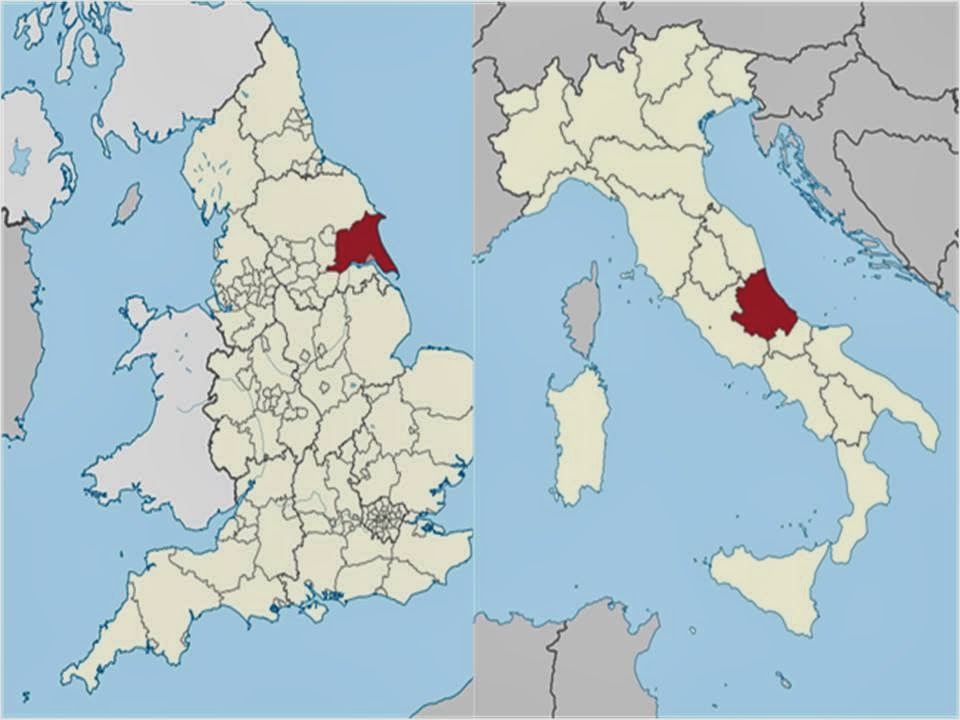 In East Yorkshire, people frequently linked areas like national parks with local food.  Many referred to places like the North York Moors and Yorkshire Dales (both national parks) as places where it would be ‘easier’ to run a local food business.  East Yorkshire was described as ‘flat and boring’ in contrast.  One respondent thought that in contrast to East Yorkshire ‘it’s good to go to a farmers’ market in Devon and Cornwall’.  While one policy maker suggested that ‘local food has the perception of being produced in the Dales or the hills, where you can see the animals’.

In contrast, the Abruzzo region has one third of its land mass designated as protected land.  Despite this many people saw the region of Tuscany as better suited to local food.  Tuscany is a popular tourist destination, but is also firmly embedded in the Italian psyche – ‘non è la Toscana’ (‘well, this isn’t Tuscany’) was a common response.  This suggests that both areas, despite their differences, encounter similar problems in being recognised as a local foodscape.

This idea of local food as being quite separate from places of intensive food production influences how policy makers think about local food in the context of East Yorkshire and the policies they subsequently develop.  Recent attempts to stimulate a LFS include a number of food festivals in the area, a Local Food Directory (here, including businesses like the one left here), dedicated local food workers and a not-for-profit company promoting local food.  All of these actions have challenged common perceptions of industrial farming regions, as one policy maker said ‘to everybody’s astonishment it was amazing just what is made in East Yorkshire, and is overlooked because the image and everybody’s thought process goes straight to North Yorkshire’.  Increasing the visibility of foods produced in the region has contrasted with previous perceptions; as one tourism business said ‘15 years ago I would have said “well we’re just corn barons really,” you know there wasn’t a lot of diversity’.

However, for some the image of East Yorkshire as industrial foodscape is enduring and represents a potential barrier for developing LFS in the region.  Although there is increasing diversity of local foods in places like East Yorkshire, many still associate such regions with intensive agriculture, as emphasised by a policy maker:

‘...it’s easy to see how you would promote lamb from the North Yorkshire Moors isn’t it?  Promoting wheat from Holderness is…just doesn’t work in the same way...[it’s] not...something that’s sold directly to the end consumer’.

Thus, industrial farming regions are still viewed by some as agriculturally homogeneous, leaving little room for the diverse range of products made in East Yorkshire, including goats’ cheeses, organic salads, smoked fish as well as lamb.  Many of the views I encountered during my research can be understood in the context of large-scale and financially profitable agriculture being seen as the norm locally.  This frames how other farming activities are understood and perceived, so that practices not fitting into this image of ‘proper’ farming are devalued.

Contrasting evidence from the Abruzzo region

Despite the Abruzzo being geographically different to East Yorkshire, and arguably a region with an ‘attractive’ landscape, many businesses and policy-makers reported similar issues.  Many respondents stated that Tuscany represented a better, stronger LFS; popular images of Tuscany were how local food producing regions were imagined.  Interviewees suggested that although the remote and wild landscapes of the Abruzzo region offered similar potential, they were not (yet) able to compete with places like Tuscany.  Italy is a varied country and respondents illustrated the difficulties that they faced in Abruzzo, such as a low external profile, relative geographical remoteness and a lack of potential customers.  For instance, one regional policy maker stated that ‘no-one knows where the Abruzzo region is, not even in Italy’.

Organic agriculture was more common in Abruzzo, as the mountainous parts of the region were not suitable for industrialised agriculture.  This ‘unspoilt’ aspect of agriculture was seen as strengthening local food production, for many ‘l’agricoltura industriale non è pensabile’ (industrial agriculture would be unimaginable here).  Organic production was accepted as a ‘good thing’ in Abruzzo, whereas in East Yorkshire organic food was viewed with suspicion, as being for ‘hippies’ and critical of conventional agriculture.

The Italian producers were aware of their fragile position in a remote part of Italy which is not the Italy that most people imagine.  Policy makers in the region referred to an increasing distance between consumers and producers, despite the vision of Italy as a nation of food lovers.  Paradoxically, despite bemoaning the increasing distance between producers and consumers, LFS businesses in Abruzzo actively promote their produce to people outside the region, for example by targeting tourists or selling to buying groups (‘gruppi di acquisto sociale’) within Italy, or international sales using the Internet.

In depth discussions in both places revealed geographically-specific interpretations of what local food is, dependent upon local contexts.  Previous conceptualisations of LFS rarely take industrial agricultural regions into account.  However, East Yorkshire is one such region successfully developing local food, thus challenging common perceptions of such places.  Similarly, regions like Abruzzo, which are generalised as having the ‘right’ conditions for successful LFS, also require support and determination to take advantage of the opportunities presented by LFS.  Despite such regions being associated with strong LFS, they do not automatically establish them, particularly as they are often sparsely populated and may be distant from consumer demand.

My research suggest that policy makers need to address the future role of such places in food production – the development of local food in both locations is something that has to be worked at and in both cases this has been achieved through policy makers trying to create a local food network/culture.  It cannot be assumed that certain regions will develop LFS while others will not – the success of LFS are not tied to particular characteristics, but can succeed with the appropriate support, promotion and determination.

A longer version of this paper has been accepted for Regional Studies, Regional Science, forthcoming.
Posted by Unknown at 11:10