Modelling Rain to River over Africa - A Paper Review

I recently had my first research article published - "Hydrological modelling using satellite rainfall estimates in a sparsely gauged river basin: The need for whole-ensemble calibration". It has been accepted by the Journal of Hydrology, with which I am very pleased, and it is available to view for free until the 27th February 2015 here. If you are reading this after that date, I'm afraid you will need a subscription to the Journal to view it.

The problem the project was hoping to address is the issue of a lack of equipment available in many parts of the world which records rainfall. There are several methods of doing this, which I explain in an older post, but the most common ways are to use a network of rain-gauges or radar, both of which are expensive to install and maintain. For many nations, the measurement of rainfall is not a priority enough to invest in these networks but they would benefit greatly from having reasonable estimations of how much rain has fallen - it allows them to monitor water resources, forecast floods and droughts, and even predict how many crops will grow. 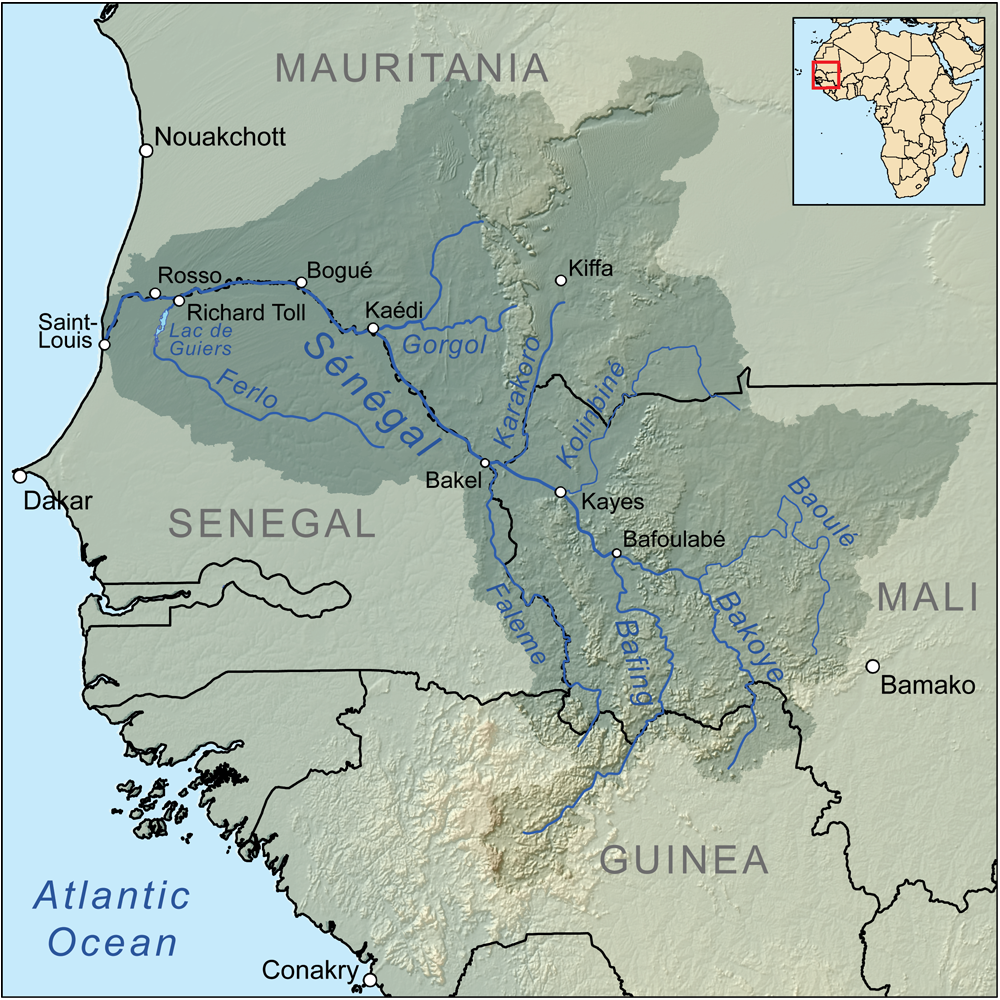 A Map of the Senegal River Basin. The rain-gauge network used for the study covered this wide area, yet the hydrological modelling focused on the Bakoye catchment (area in the south-east, containing both the Bakoye and Baoule rivers). (Image by Kmusser)

My research focused on a section of the Senegal River Basin, a large area with only 81 rain-gauges across the wider region with which to estimate rainfall, a density of 1 gauge per 7,000km2. The density of the network is the equivalent of covering the UK with only 27 rain-gauges. There would be no way we could capture the complexity of our rainfall with so few gauges, and in reality the UK maintain a network of over 4,000 gauges with a density of 1 gauge per 76km2. In addition to this, the UK also maintain 15 rain recording radar stations, yet none are available to the Senegal Basin region.

Currently, the best way around this and to fill in the gap is to use information from satellites. For continuous observation of the same area it is not yet possible to directly observe rainfall, but it is possible to monitor other factors that indicate rainfall, particularly the temperature of clouds. Unlike the UK, this area of Africa generally only receives one type of rainfall, so there is a strong relationship between the temperature of the tops of clouds and whether they are raining - if the cloud is below a specified temperature it is assumed to be raining - the longer it remains below that threshold, the more intense the rain is thought to be. This is all calibrated against the very little rain gauge data that is available. 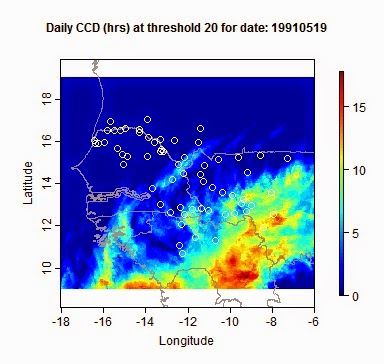 Example of a processed satellite image showing the number of hours each pixel of the image is below the specified rainfall (here it is -20c). The number of hours is known as the Cold Cloud Duration (CCD) and this is related to rainfall. The rain gauges used for the project are represented by the white circles.

Unfortunately, as this is not directly observing rainfall it can be wrong on occasion, and especially so when a user tries to make use of it at a smaller scale than the density of the rain gauge network. When the estimates are used as information for models, such as a hydrological model to estimate river flows, the errors in the rainfall estimates are passed on to that model. What we do know, however, is just how wrong the rainfall estimate could possibly be and this allows us to try and represent this.

The increasingly common way of representing this, what scientists call uncertainty, in the rainfall estimate is to take the value of how wrong it might be and to randomly produce several hundred different versions of the possible rainfall - each different but equally possible based on the information available to us. The users takes this ensemble rainfall estimate and feeds each member individually into the hydrological model and produces an ensemble of river flow estimates. Statistics can be used to suggest the probability of river flows for each step in the record. 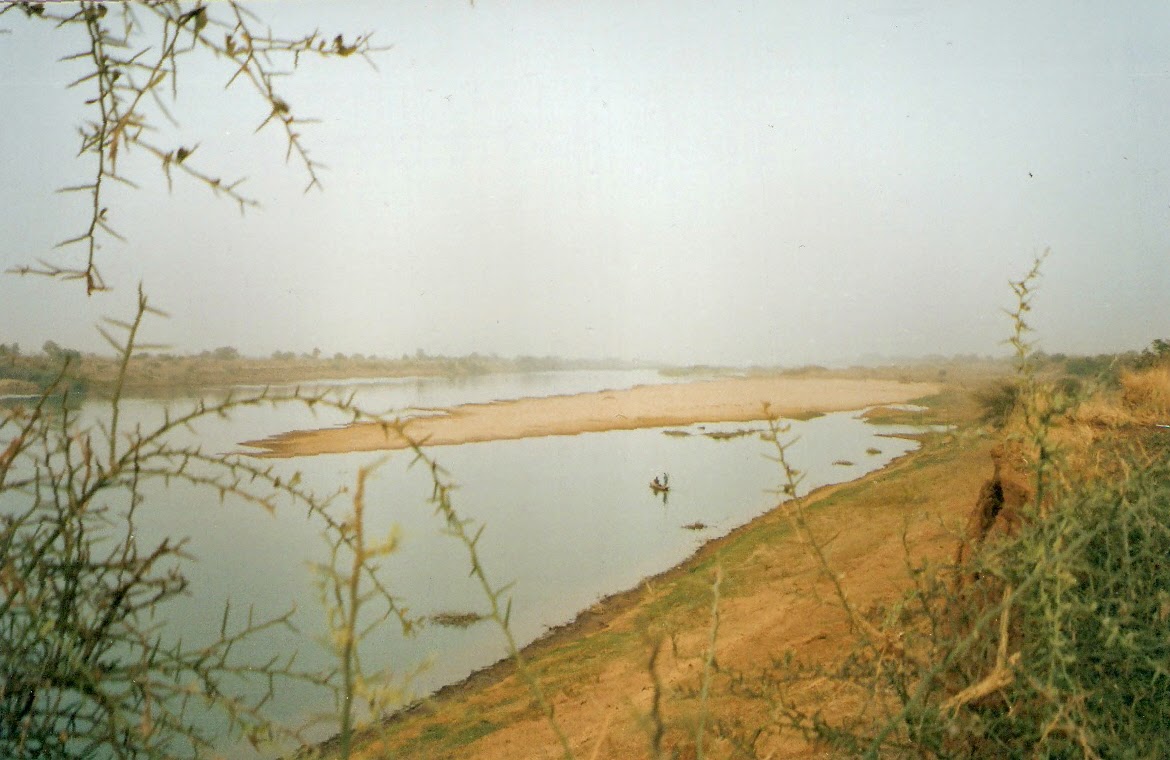 View of the across the River Senegal in the Kayes region, downriver and north of the study site. (Image by Bourrichon)

This is where my research came into the process. Hydrological models need setting up before they are used and this is done via a process called calibration. You need a period of the record with rainfall data and recorded river flow data, and you vary adjustable values within the model (these are called parameters) until you get the closest match between the recorded river flows and what the model estimates. You then test this against another period of recorded river flow that was not used in the calibration to test its performance (known as validation or verification).

It is good practice to calibrate a model using the same data you intend to drive the model with. For example, the model will not perform as well if you calibrate it using rainfall data as estimated by rain gauges, but subsequently run the model using satellite rainfall estimates. This poses a particular problem for when you intend to run a hydrological model using ensemble rainfall estimates. This has previously been performed using either using the original satellite estimate (disregarding its uncertainty), or an average derived from the ensemble members. However, I tried the calibration using all the ensemble members individually, but assessing the model performance with them as a whole - this is called whole-ensemble calibration and named EnsAll in the paper. 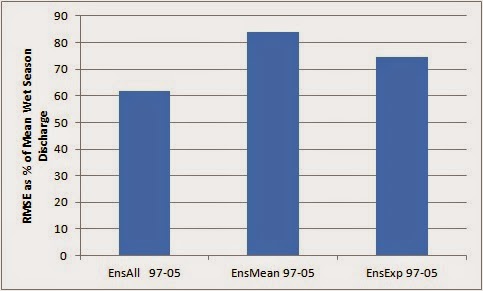 Graph showing the mean error from the Pitman model, run separately with each ensemble member using data for the period 1997-2005. The model was calibrated using data for 1986-1996 using the whole-ensemble method (EnsAll), the daily mean rainfall estimate from all the ensemble members (EnsMean), and the theoretical mean of the ensembles (EnsExp). EnsAll clearly produces less error than the other two calibration methods on this measure.

I do hope that this provides you with a better understanding of the paper. If you want to know more of the technical details it is all in there, along with some nice statistics and some graphs to make Dave Gorman weep with joy. The research represents only a very small facet of the problem, which will require many more small facets to solve rather than one big one. I hope to produce a few more.