Following on from Michelle’s recent post on her fieldwork in Malta, several of us have decided to blog about what we’re up to over the summer break from teaching, specifically our summer research and/or fieldwork. As a historical geographer and landscape historian, much of the fieldwork I’m engaged in is rather different in nature to that undertaken by my physical geography colleagues. It doesn't involve flooded rivers or exploding volcanoes, dark caves or slippery climbs up glaciers. It doesn't require a great deal in the way of equipment and doesn't involve long and detailed risk assessments (for which I count myself extremely lucky). Instead it all takes place in the UK, a good deal of it within two or three hours’ drive of my office here at Hull. Much of what I do relies on a combination of landscape history fieldwork, maps, aerial photographs and documentary records. For me, fieldwork often consists of carefully scrutinizing – and sometimes photographing, measuring, and generally poking around – the landscape for traces of the past in the present. Hedges, field patterns, green lanes, boundary stones, and old buildings can all tell us a great deal about the way past landscapes were organised, resources utilized and space experienced by those who lived and worked there (for more on this kind of approach to the landscape, readers might like to check out WG Hoskins’ classic The Making of the English Landscape). 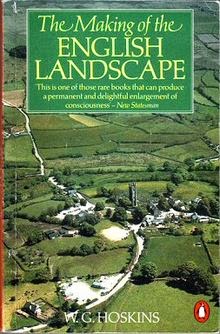 Hoskins' classic The Making of the English Landscape (paperback edition)

Yet this summer my ‘fieldwork’ hasn’t for the most part taken place in the field at all. Along with some odds and ends of fieldwork for other projects (for example, on the Diggers – on which more another time), I’m spending the summer chasing up loose ends for the book I’m writing on aristocratic and gentle women’s contribution to estate management and improvement in the long eighteenth century. This project has involved some work in the field proper – for example, visiting country houses owned by women, tracking down their grave inscriptions and identifying building work designed or paid for by them – but also a great deal of archival work. I’ve been to county record offices and private collections all over the country looking for evidence of women’s contribution to estate management and improvement, making use of collections from places as far apart as Cornwall and County Durham. So, like my physical geography colleagues, I’ve certainly clocked up the miles on this project if only within the UK. Moreover, we can think of archive work as a kind of field experience (on which see Lorimer, 2010 and Keighren, 2013). For historical geographers and others, local and national archival repositories provide spaces for collecting data and testing theories, sites where outcomes are often unknown and unpredictable, and where one may have to dig through endless boxes or volumes before alighting on something fantastic or finding just what you hoped might be there. And while they may be neither muddy nor dangerous, public search rooms and archive back offices are frequently cold and uncomfortable places and the documents surprisingly filthy.

My latest foray has been to Surrey History Centre, a new-build (and warm) archival repository on the outskirts of Woking. In my book I’m writing a bit about a woman called Jane More Molyneux, who inherited the Loseley Park estate near Guildford after the deaths of her brother and sister in 1776 and 1777, respectively. Like many of the propertied women who feature in my book, Molyneux was a dedicated estate manager and committed bookkeeper. I spent a day reading the volumes of estate accounts and records kept by Molyneux as she tried to repay the debts run up by her spendthrift brother and save the estate from financial ruin. The house was in a terrible condition: the account books contained endless payments for ‘pans to catch the drips’ and the steward was instructed to look over the exterior of the house every day in order to check that there was no stonework likely to fall and injure someone! In the winter, snow had to be shovelled out of the attics so bad were the holes in the roof. Plus the whole place seems to have been overrun with vermin.

Yet Molyneux took on her task with great resolve, renting out the agricultural estate in an attempt to raise cash to repair the house, selling off outlying parts of the estate and economizing on her housekeeping costs wherever she could. Ultimately her efforts paid off and by the early 1790s both the house and the estate finances were in a much improved position. Molyneux then made the somewhat unusual decision to lease out what was left of the land in hand including the house and gardens and move to London. Though she spent the rest of her life in the capital, Molyneux had already done much to secure the financial well-being of future generations of her family. Amongst the numerous volumes of accounts, notes and memoranda she handed on to her heir – the illegitimate son of her profligate brother – was a book recording the repairs she had undertaken on the house and estate in the 15 years she lived on the estate. This she had inscribed as ‘for my own perusal and satisfaction’, a note which reminds us of the personal sense of achievement and pride that women might take in bookkeeping, and indeed in estate management more generally – a theme which my book explores in greater detail. 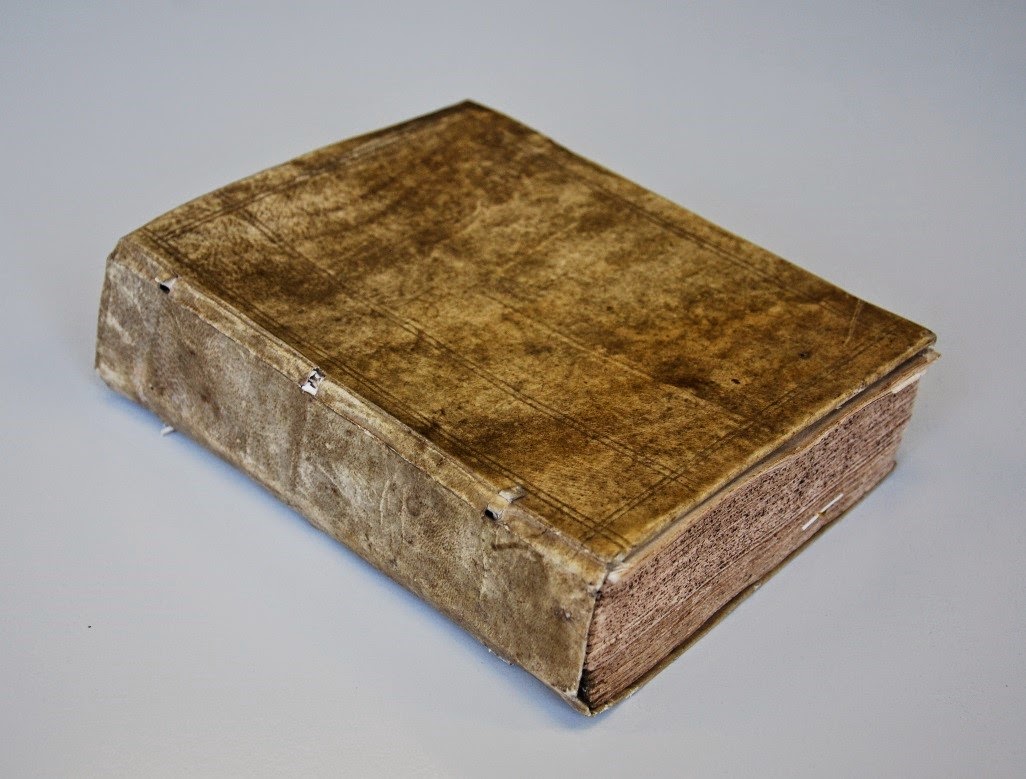 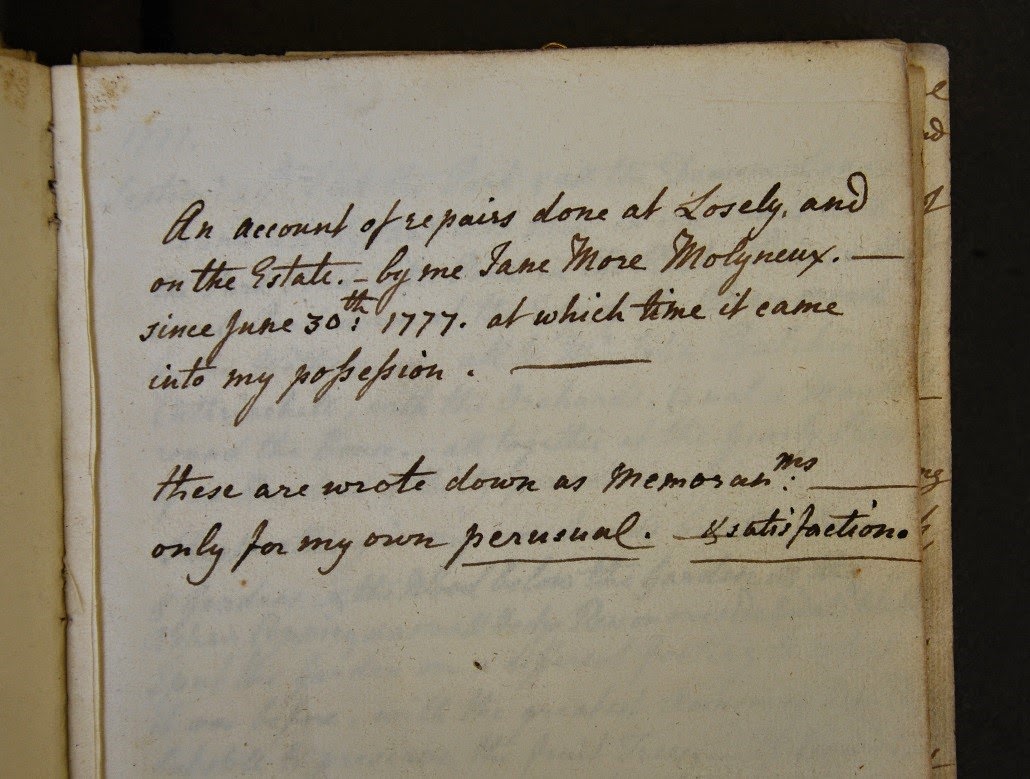 One of Molyneux's account books (above) and detail from it (below).
Original at the Surrey History Centre. Photo B. McDonagh.

So all in, this was a good day’s work in Woking. I wasn't plagued by any of the difficulties which sometimes beset archive work – documents ‘not fit for production’, missing items or indecipherable handwriting – and unlike many Georgian women, Jane More Molyneux left a substantial collection of material which can be used to reconstruct the details of her life and estate management. More than once I’ve spent fruitless days struggling to find the materials needed to unlock the ‘hidden histories’ of particular female landowners, but here at Surrey my ‘fieldwork’ was a success. I’m now working on writing up Molyneux’s role in estate management for the book, and thinking about how her experience relates to that of other propertied women in Georgian England. But to find out the answer to that, you’ll need to keep an eye out for later blog posts on the project here and elsewhere. Or perhaps even buy the book!