Over the last ten years (or so) lots of research has looked into why students choose to come to the UK (or go elsewhere), including my own. This isn’t surprising as international students represent a key part of our student body in the UK. In fact during 2012/13 just under 20% of the students studying in UK institutions were non-UK domiciled (i.e. they did not hold a UK passport) (check out the HESA website for more information). International students are important for lots of different reasons but often research has tended to focus on the economic benefits. This isn’t surprising either, in the UK international students from outside of the EU can pay over £30,000 a year in fees (depending on where they study) and can therefore be an important financial support for some universities. However, this is only part of the picture as they can also make significant contributions to the wider economy, in 2012 the University of Exeter, together with Oxford Economics published a report which suggested that the 5,000 international students at the University of Exeter supported some 3,280 jobs throughout the South West of England (see here).

However, it is important to recognise that international students are not only important financially, they are also important culturally. We live in a world where the job market is no longer local, it’s global – so it’s really important that students leave university with an understanding of how to communicate with people from a range of different social and cultural backgrounds, international students provide a way of bridging some of these cross-cultural divides (in an ideal world). All of this means that universities (and you) have a vested interest in supporting the international student community here in Hull or wherever you are! 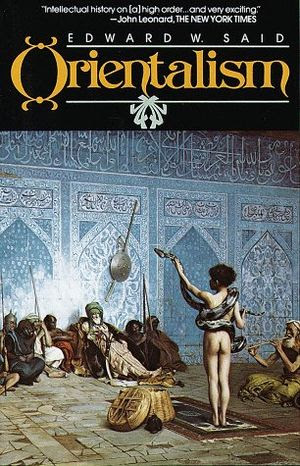 My work has tended to look at the motivations for overseas study and I have recently published a paper in Area on how international students use different imaginative geographies to decide where to study. In a nutshell these imaginative geographies come out of the perceived power relations between two nations. The term was originally proposed by Edward Said in his seminal work of 1978 Orientalism (well worth a read) in which he demonstrated how the West created an imagined, exotic East and how these perceptions spread through literature and art, as well as stories from those who had travelled to these foreign destinations and so on. We still have imaginative geographies today, and they don’t just have to be in terms of the West looking on the East, but rather anything that compares the familiar (‘Ours’) with the unfamiliar (‘Theirs’ or ‘the Other’). Think about it - we are constantly bombarded with information about the ‘Other’ – friends’ holiday photos on Facebook, television programmes which allow us to ‘experience’ somewhere else, books, travel brochures, the incredible wealth of information we can find on the Internet – all without even leaving your home.

So what (imaginative) geographies do we like to send out to our potential international students? The British Council and Education UK are responsible for promoting the UK to prospective international students and on the 28th September 2012 they published this YouTube video entitled ‘The Adventure of a Lifetime’.

It follows a typical, female international student who is 'hard-working', 'friendly', 'intelligent' and 'fun-loving' from her arrival in the UK until graduation and all of the experiences she has along the way. It portrays the UK as exciting and diverse, a place where you will get a top-class education, but also have fun along the way. In my opinion one of the most interesting things about the video is the lack of differentiation between different regions in the UK. The British Council is usually good at this, but that doesn’t seem to be the case here. The video also does something else that is very important in terms of international students’ imaginative geographies – it reiterates the ideals of academic imperialism. The UK is the place to study.

There are lots of different aspects to imaginative geography, but three in particular matter when it comes to international students:  ideas of power and postcolonialism (academic imperialism comes in here); the importance of community and shared imaginative geographies; and the evidence that imaginative geographies are not necessarily accurate they are, after all, ‘imagined’. To give you an example I will introduce you to one of my research participants, Rafiah (not her real name). She came from Trinidad and Tobago and had chosen to study in Nottingham, she was about 20 when we first met. Rafiah commented that coming from Trinidad and Tobago the UK  had seemed almost “magical”, she felt that people at home sometimes had a bit of an “inferiority complex” and that there is often a real desire to study and live somewhere else. This did not mean that Rafiah did not like her home country, but rather that her schooling, education, upbringing, and so on had encouraged her to think of studying overseas as an important alternative to studying at home. This was something that was common in her home-country, she told me that when people got the opportunity to study overseas they almost always decided to pursue it. So, here we can see how this is reflecting in part those (post)colonial ideals (the UK is better than home) and also how this is also a shared or community process (everyone who can does it).

However this is really only part of the story, what also matters is whether all those years of dreaming lived up to the reality. Well, Rafiah was more than a little surprised when she arrived in Nottingham – the city was not as she thought it would be. This is not unusual, many international students won’t have visited their universities before they arrive and they can be shocked when they get here. Rafiah had visited London, but she had never been to Nottingham before, and she was taken aback at how different it was to the hustle and bustle that she had experienced in the capital. In fact she had believed that Nottingham would be very like London in some ways, she was a bit disappointed almost that it was a “quiet little place”. This is just one person out of the many that I spoke to, all of them had similar stories to tell – dreaming and imagining their experience was a key part of becoming an international student.

So why does this matter for us? Well, as I mentioned at the beginning, international students are a really important part of our student body. They are a financial asset to the UK’s universities but equally they are a cultural asset as well. It’s important to understand how and why they choose to study overseas and to consider what makes us an attractive destination. So where should our research go from here? I’m currently considering some new research directions, away from international students themselves and towards those who do the recruiting. Understanding how universities and the UK promote themselves will provide greater insights into how they mobilise imaginative geography when selling the ‘place’ of the university. And what about you? Well, research has suggested that contact between international and local or host students is often limited – if you are studying or working ‘at home’ why not try to make some extra efforts to befriend someone from overseas and get to know a bit more of their story.


You can find a link to my paper here: