Visitors at an Exhibition

Dr Ruth Slatter has been a Lecturer in Human Geography at the University of Hull since January 2018. Ruth is interested in how individuals experienced institutional spaces during the nineteenth- and early twentieth-century. Here she talks about her recent trip to Chicago’s Newberry Library and her research into nineteenth-century international exhibitions.

Historical geographers, historians and design historians have long been interested in international exhibitions. These discussions often beginning in 1851, the year Queen Victoria and her husband Prince Albert triumphantly opened the Great Exhibition in London. Famous for its glass, greenhouse-like temporary building, which became known as the Crystal Palace, the exhibition displayed industrial, designed and natural products from across the world. During the rest of the nineteenth- and early twentieth-centuries this exhibition set a precedent which was replicated across Europe, America and Australia. 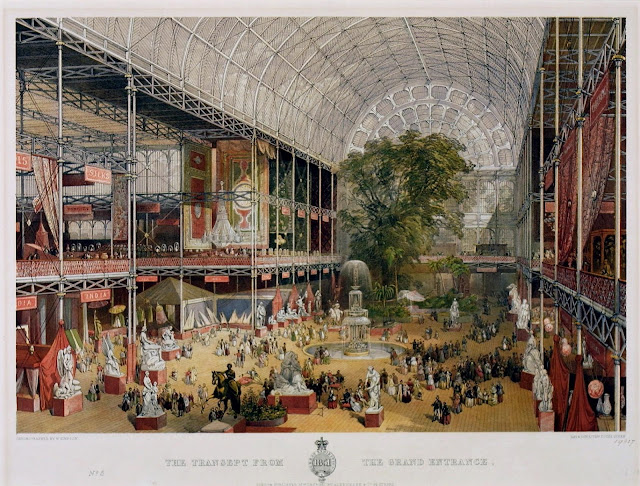 J. McNeven, The transept from the Grand Entrance, Souvenir of the Great Exhibition
© Victoria and Albert Museum

Bringing together representatives from each of the represented nations, these exhibitions were – what we would now refer to as – megaevents and played an important role within the colonial politics of the nineteenth-century western world. Like today’s Olympic Games, World Cups, or Cities of Culture designations, these events were an opportunity for cities to be shown off to an international audience; for countries to demonstrate their wealth, cultural capital and political influence; and for competing nations and empires to gain an international reputation for innovative design, beautiful craft, or even rich natural resources. 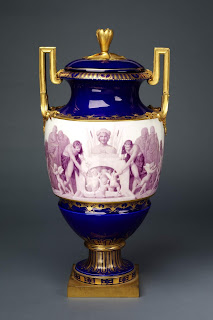 Sèvres porcelain, displayed at the 1862 International Exhibition as part of the French display
© Victoria and Albert Museum 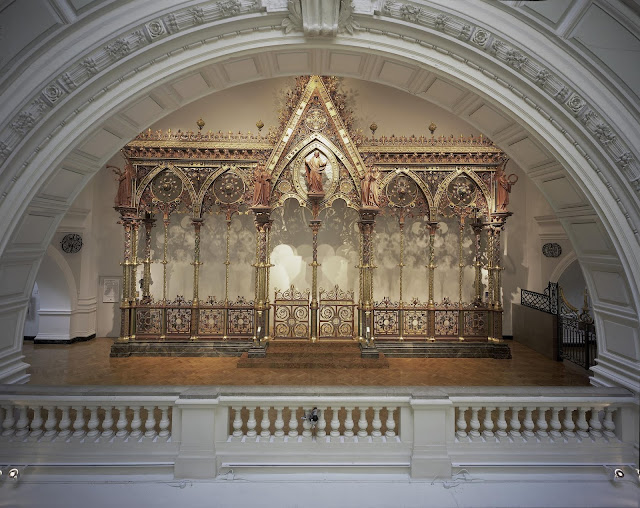 However, these exhibitions also created the opportunity for all members of western societies – from Lords and Ladies to pit men and match stick girls – to see the world in their back yard. Therefore, my research into these events combines traditional discussions about their political purposes, with consideration of how visitors experienced them. My research has largely focused on London’s 1862 International Exhibition – the rather poor and under considered relative of the earlier 1851 Great Exhibition. Working with Helen Creswell, curator and design writer, I have been exploring peoples’ sensory experiences of these events, asking questions about the extent to which visitors engaged with their underlying political purposes and considering them as part of the urban spaces in which they were located.

Edmund Walker, Exterior of the International Exhibition of 1862
© Victoria and Albert Museum

In November 2018 I was invited to speak at the Newberry Library in Chicago about this research. They had organised an exhibition about the 1893 Chicago World’s Fair (the American term for an International Exhibition) using their extensive collection of related material and organised a set of related public events.

In this talk I explored a number of different ways in which we can discuss visitors’ experiences of these events. Considering the designs, the ground plans and the guidebooks made for these events, I spoke about the scale of these buildings, how they were confusing to navigate and therefore left visitors feeling exhausted and bemused. Engaging with commentaries written about these events in contemporary newspapers and magazines, I reflected on the many sounds that would have been heard in these spaces: the clatter of working machines, the tinkle of piano keeps, the chime of porcelain cups in the tea room. With reference to images of these spaces published at the time, I emphasised the importance of thinking about what visitors’ touched while in these spaces, how their bodies were often pressed together during busy periods and how they would also have brushed up against exhibits in often cluttered exhibition spaces. And, positioning these exhibitions within their urban contexts, I discussed how visitors’ experiences of these spaces were not only informed by what they saw, heart or felt in these spaces, but also their experiences of the (generally crowded) public transport and roads they used to arrive and depart from these events, the hotels and hostels they stayed in, and the character of the city in which these exhibitions were located.

And you can also listen to a podcast I recorded for the Newberry Library, going into a bit more detail about the 1862 International Exhibition in particular here: https://soundcloud.com/newberrylibrary/the-1862-intl-exhibition-revisited