The Road to Graduation

On the 19th December 2012 I submitted my PhD thesis. 6 months and 20 days later and I have just graduated! The process in between these two dates was most surreal, with a never ending feeling about it. Until yesterday! 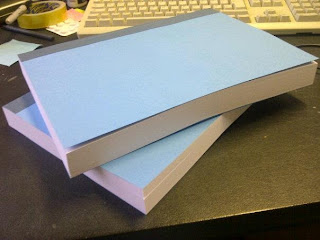 My research focused on investigating sustainable solutions for roadside gully pot management, which came as a result of the 2007 Hull floods. The fortnight leading up to my thesis submission was one of the most stressful and tiring times of my life, but the massive feeling of accomplishment I had when I handed those two large copies in was overwhelming. After the celebratory buzz (and the hangover) settled down, it quickly sank in that the PhD process was still not over, and wouldn’t be for a while. Not until after the Viva Voca. And then the corrections.

This was the strangest feeling, the thing which I had been so focused on and had taken over my life for the past three and a half years was written up, bound and handed in, all my lab work was completed and my bench space cleaned, but the process was not finished. It was now in the hands of the gods (or the Professors that were marking it). I felt a little lost to be honest, like all PhD researchers I had got into the system of thinking of nothing else but the PhD, thankfully I had the gluttony of Christmas and New Year to take my mind off this.

When I returned to uni I bumbled along trying to get back into a ‘normal’ routine. My time was filled doing bits of work on a new paper and applying for jobs. The false feeling of it being over snuck in, then I received an email with the Viva date.... and the stress twitch came back.

I had one month until the exam. I spent the first two weeks trying to work out how to prepare for this thing which had terrified me since the day I had signed up to do the PhD. Eventually after asking just about everyone in (and out of!) the department, I started to revise my thesis, the area around it and anything else I could grasp at.The day came incredibly fast!

My hands were clammy and my mouth was dry, and this was just on the approach to the department. I was absolutely terrified! My examiners were lovely, they tried to relax me at the beginning with compliments, easy introductory questions and questions about my finds while sampling (bowling balls, money and plastic Gary Lineker legless toys seemed to raise a smile). Then the real questions came, quick and fast. Thankfully I was able to answer most with confidence but there were some hairy times where I felt I was just digging myself deeper into holes. After about two and a half hours they called an end to it, and I was sent out while they made their decision. I went to wait in my supervisor’s office (who looked like a new parent waiting for his first child to make an appearance) and although I was only out for 10 minutes it felt like it lasted longer than the Viva itself! I was called back in to smiling faces, as I was told I had passed with minor corrections. I was over the moon! The celebrations started straight away but I found myself being so exhausted from the whole thing I had to head home for an early night and resume the celebrations on the next day! 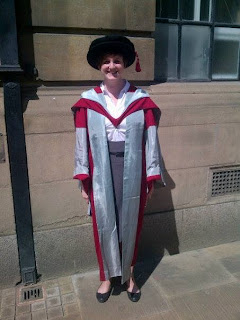 After a week of soaking it all in that I had actually passed, it dawned on me it still wasn't over, there were the corrections to do. Thankfully I only had minor corrections, which didn't take too long, but it did take a while to get my head back into it and get them done for the summer graduation deadline. As you can guess from this blog, I made it. It’s officially over. I’m finally done. There is no more work to do, apart from squeezing one or two more papers from the thesis and then put it on the shelf to gather dust. And that feels amazing. Knowing all the ups and downs, late nights, early mornings, retests, retrials and re-jigging of work was worth it, and collecting that piece of paper amongst the rest of the graduates who have all been through this makes it that much sweeter.
Posted by Unknown at 11:00