One of the great joys of academic life is getting the opportunity to communicate our research to the public - it is one of the key motivators of this blog after all. We spend much of our time in a bubble and become accustomed to our jargon and way of life which seems a bit alien to those outside the bubble, so it is also very healthy for us to step out once in a while and engage with those out there. The challenge is finding ways to communicate our research in ways that are informative and engaging.

This year, the Faculty of Science and Engineering at the University of Hull organised the Hull Science Festival. Running as part of National Science Week (which one attending school pupil pointed out to me was 9 days, and not actually a week), it saw students and staff from the university present their research to members of the public.

The Science Festival ran on a Friday and Saturday. Friday was an early start as the Hull Bondholders ("The Bondholder Scheme is an almost 200-strong powerful network of businesses, who work together to raise the profile of the Humber") held their regular breakfast meeting at the University as part of the Festival, which allowed us to explain the benefits of our research to business in the area. After the breakfast (after we had mopped up the leftover sausages - all the bacon had gone), the audience changed to school pupils and their teachers, as local schools were invited to attend.

Throughout the day the marquee containing the exhibitions was open for the pupils to mill around and chat to us, whilst the schools took it in turns to attend the presentations and demonstrations conducted elsewhere on campus. Unfortunately, I did not get the chance to see any of these. The pupils all seemed very excited and keen to know more about the displays on offer, and I also got the chance to chat to the teachers from my old school, Baysgarth, who had brought some pupils along.

The Saturday was open to the public to just come and go as they pleased and wander, and hopefully wonder, around. This was a busy day where I spent almost all of it talking to people about my research and the Humber. It coincided with an Open Day too, so prospective students got a further opportunity to see just what an active and exciting university we are.  All in all, it was a great couple of days and I hope it becomes a regular fixture in our calendar.

Unfortunately for me and my chances of looking around, both days were very busy and I spent much of it manning my stall, demonstrating the Dynamic Humber Project's work on understanding the 5th December storm surge, but I did get to see some of the neighbouring displays.

GEES were out in force for the Festival, as shown below - 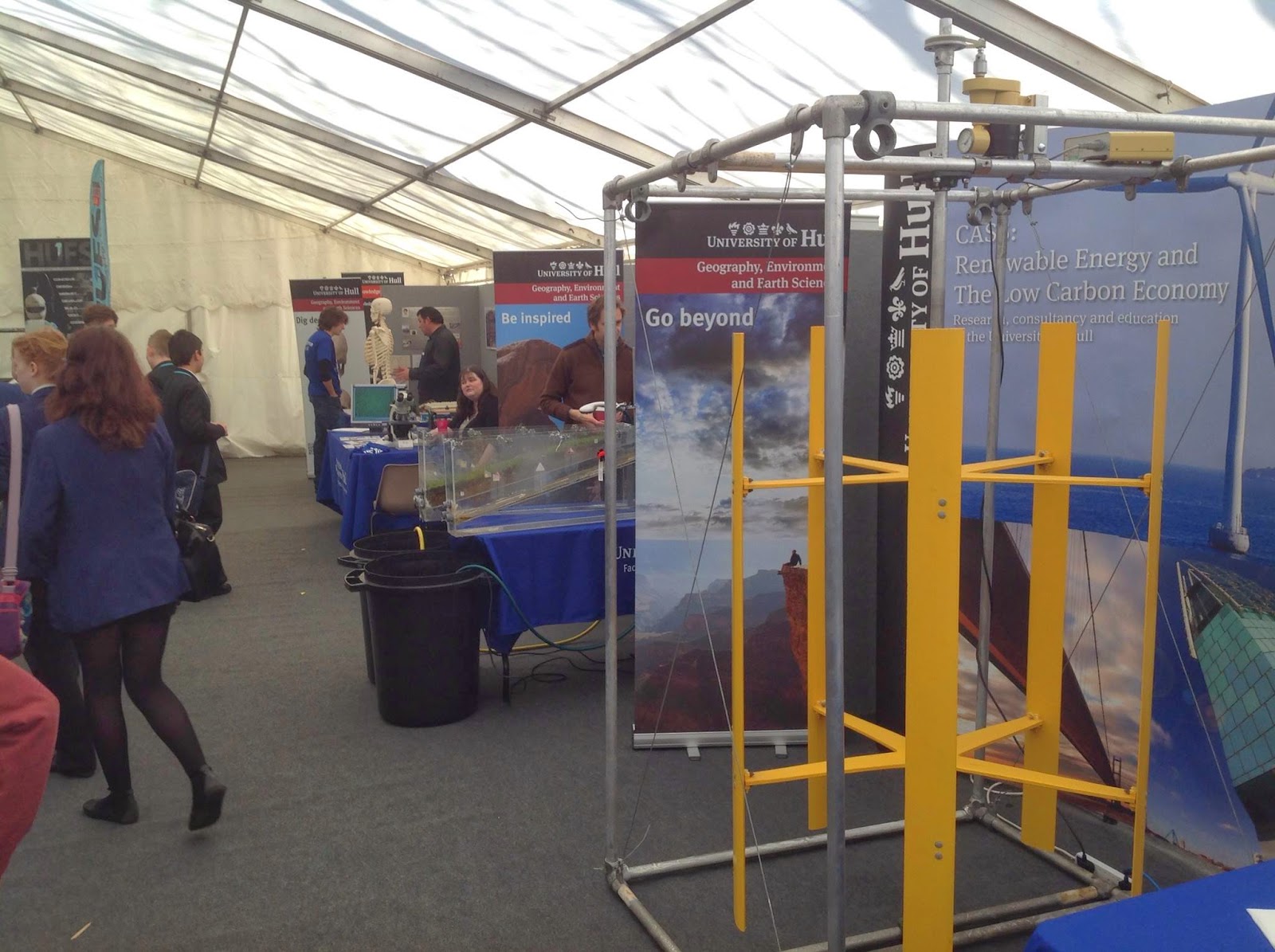 The view over the GEES displays 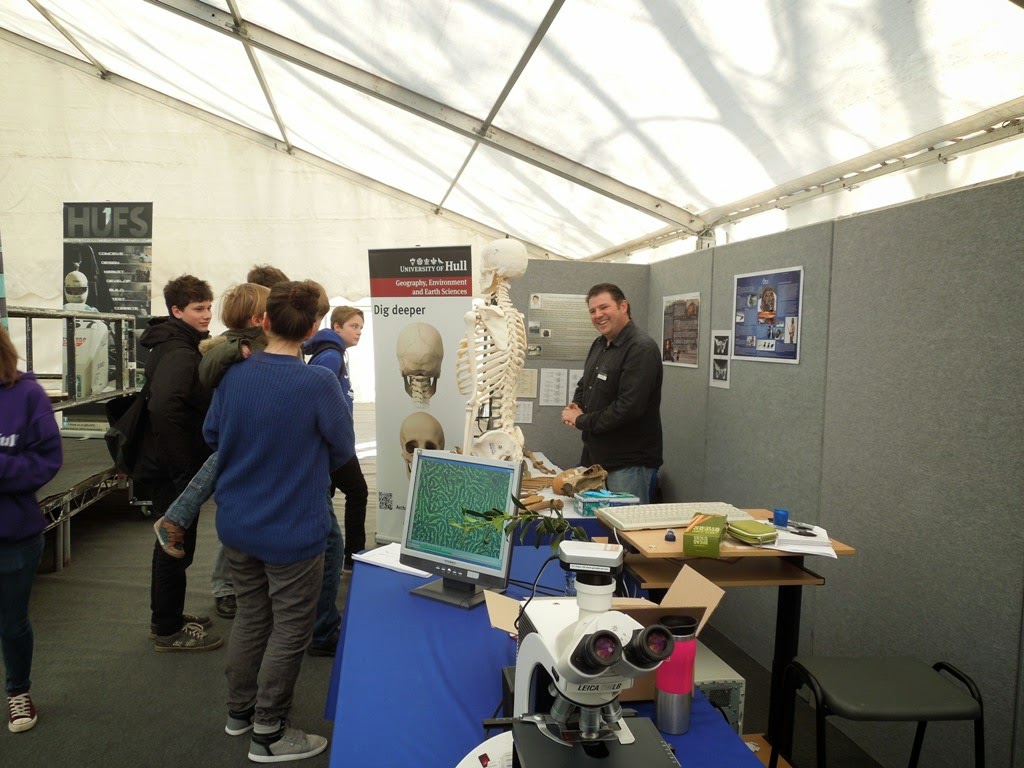 I've got a bone to pick with you! (Photo by Dr Jane Bunting)

Dr Malcolm Lillie brought along skeletons and bones from his archaeology collection, including some pieces which were over 7,000 years old. 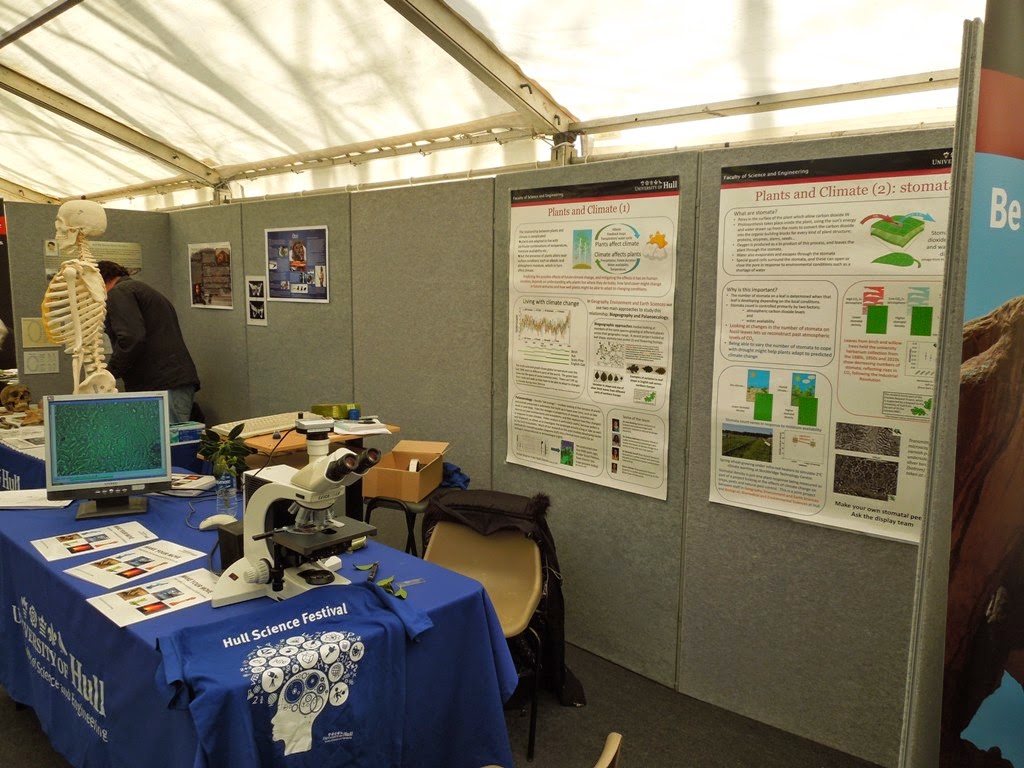 Dr Jane Bunting set up a microscope and gave people the opportunity to take peelings from a holly leaf. Observing these peelings under the microscope revealed the leaf's stomata (mouth-like pores that exchange gases and moisture between the the air and the plant) - this was to highlight the research into how leaf structure can change in response to weather and climate. 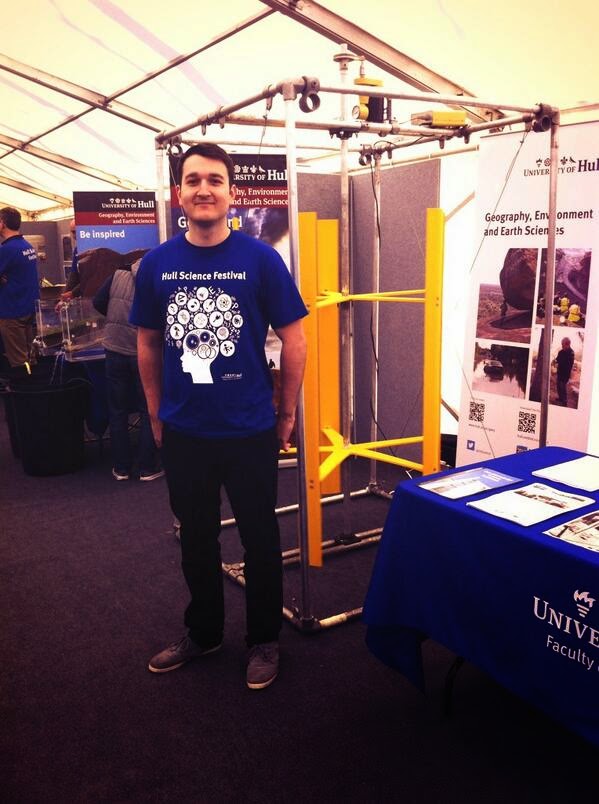 Prof Jack Hardisty brought along a prototype of a tidal generator which was used to demonstrate the potential of harnessing the abundance of tidal energy in the Humber to generate electricity. 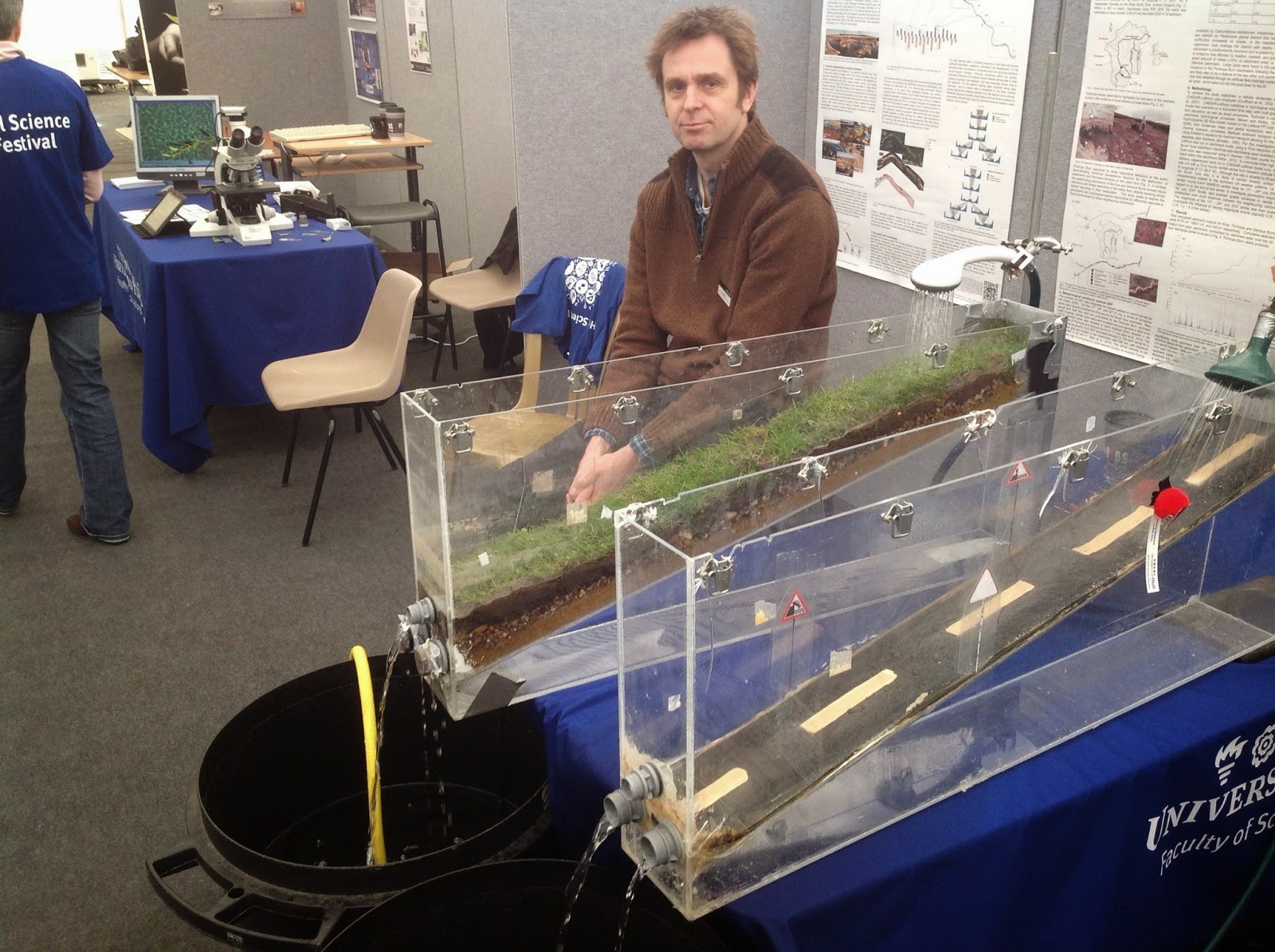 Here, Dr David Milan demonstrates how changes to the land surface can influence run-off. Whilst the water on the hard surface drains the tank very quickly, the natural surface absorbs the water, holding it for longer and reduces the levels of flow - this can help reduce the impacts of flooding.

In addition to the displays above, we also had posters from other members of the Department, including showing off research in Human Geography by Prof David Gibbs and Dr Kirstie O'Neill, who showcased their research on green entrepreneurs  and the role they play in making building more sustainable. Dr Deborah Butler was often seen wielding an iPad ready to demonstrate the FoodCrowd app she blogged about last week.

We weren't the only ones at the Festival, not by a long shot, and below are some the highlights around the marquee - 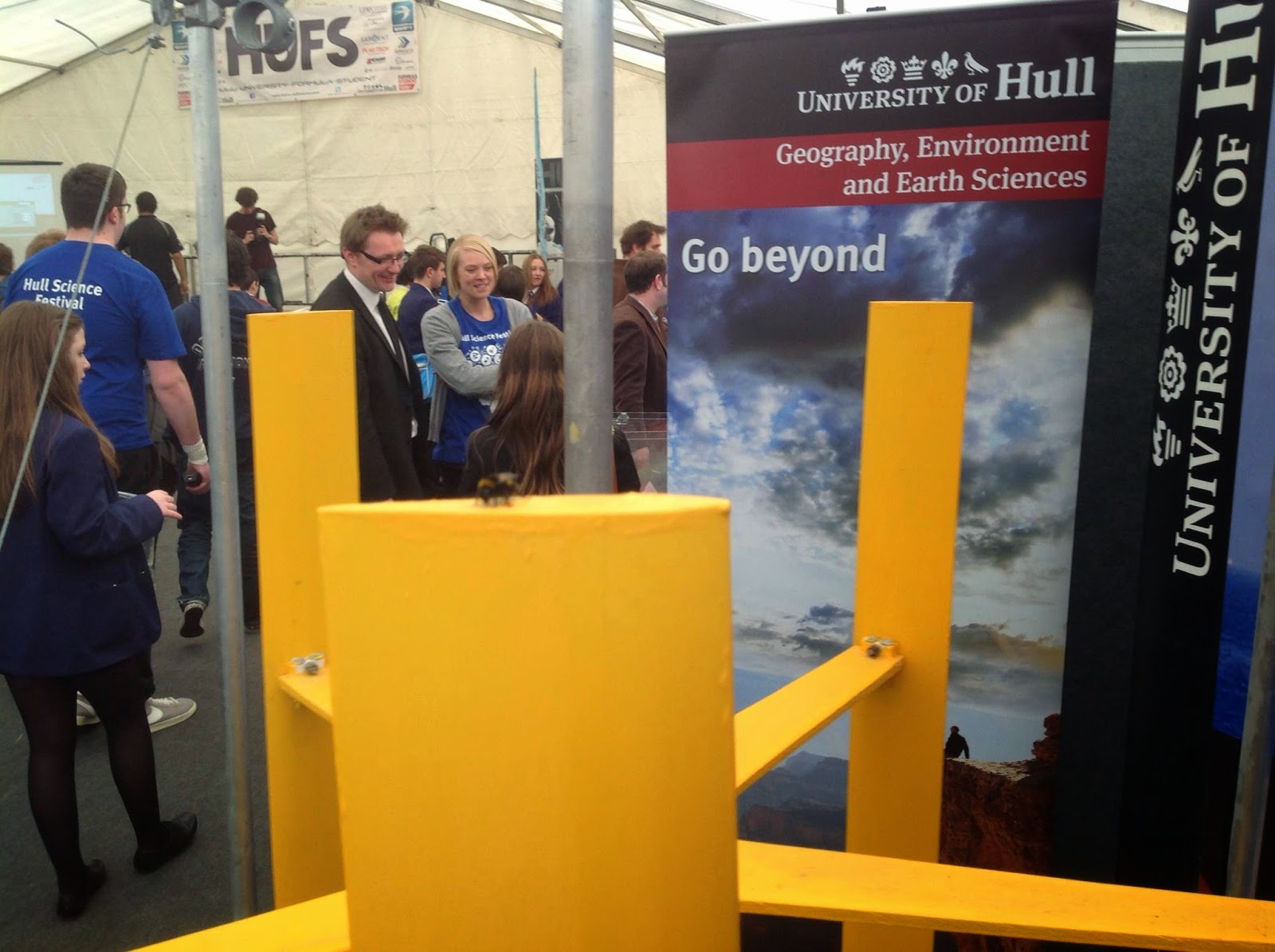 Dr Darren Evans from the University's School of Biological Sciences brought along some bees in a commercial hive. Although largely confined to a netted cage, one plucky bee escaped and enjoyed a ride on the tidal generator. 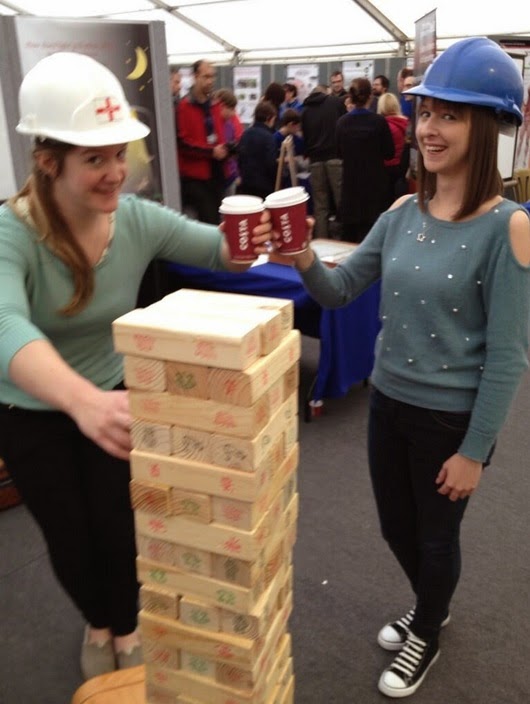 Dr Evans also brought along his giant Biodiversity Jenga set, which demonstrates how the successive removal of species from a system can lead to environmental collapse. 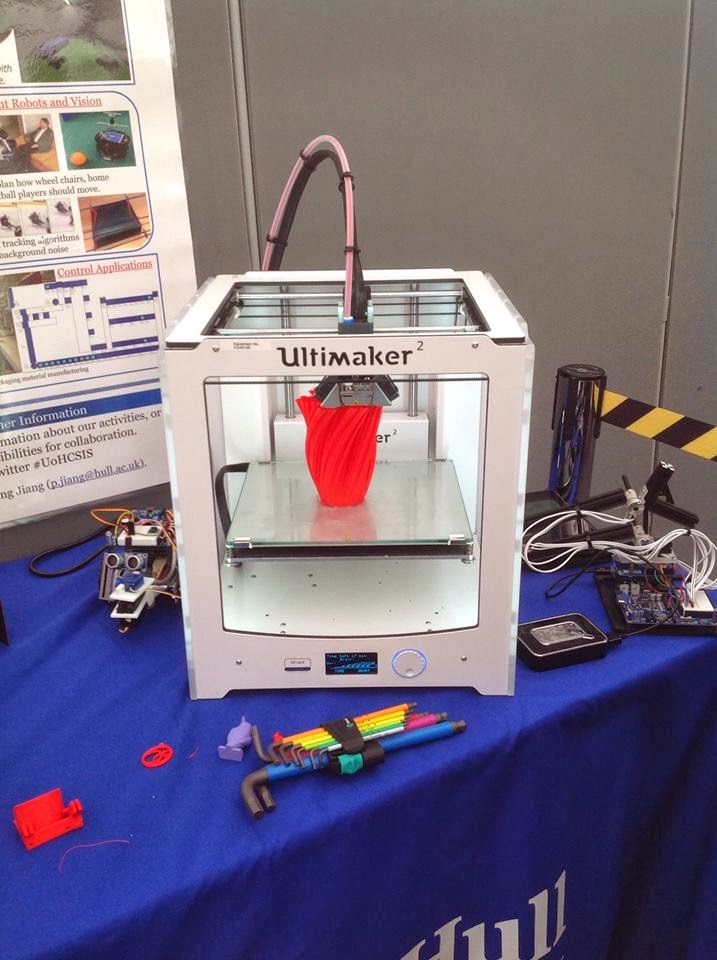 My favourite part of, my limited view of, the Festival was the 3D printer brought along by Computer Science. I love these things and have been following their development for years, but this was the first time I had seen one for real, and it was working! The potential for these things is enormous, and I'm not just saying that as a secret collector of toy soldiers. Computer Science also brought along a few robots and their Oculus Rift (virtual reality equipment, recently purchased by Facebook) set up which they aim to use to train people to install and maintain offshore windfarms from the shore. 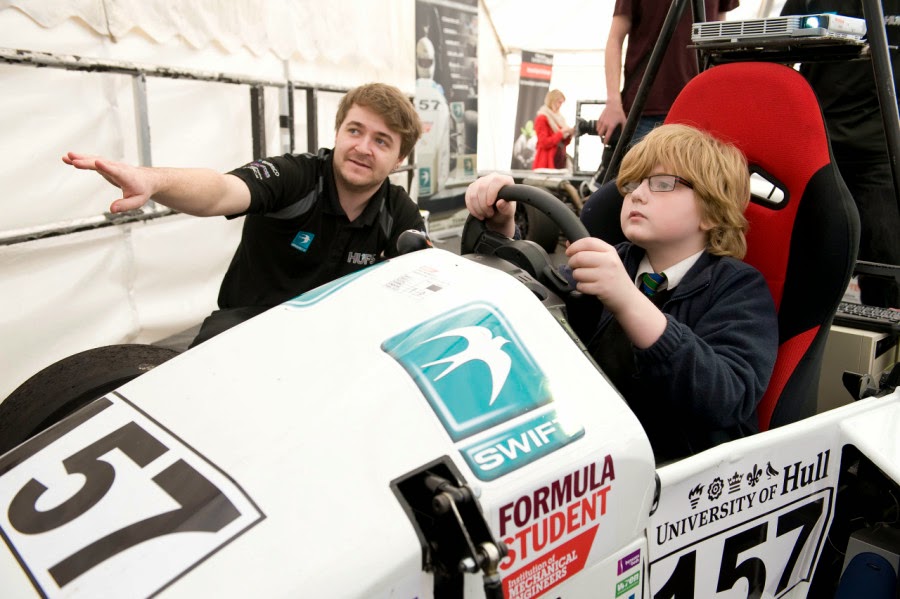 Also there were the Hull University Formula Student team. A group of Engineering students who have built a racing car and race it in competitions. Their demonstration included a sit in simulator where people could have a go themselves - there was also a leaderboard going for the fastest lap times. 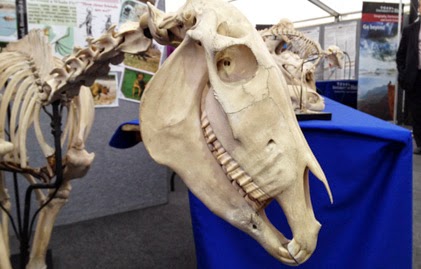 Opposite me was a popular set of animal skeletons. I was told that these were donated to the University by the Natural History Museum in London when the University was founded in 1927. They are exquisite things, and included an ant eater, a horse, tortoise and a rhino skull. 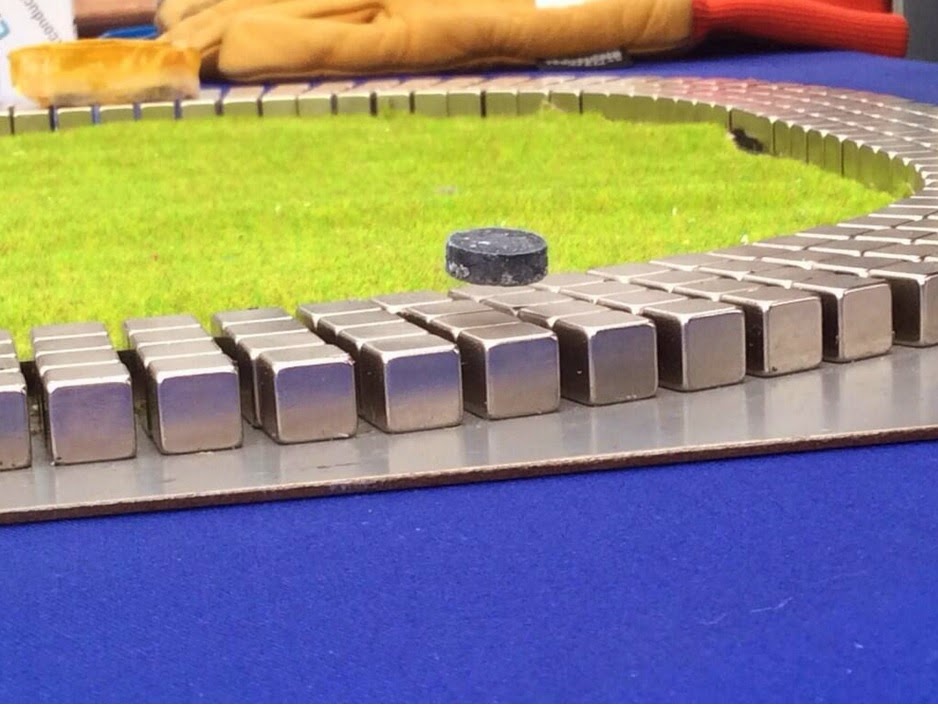 Throughout the day I saw many people walking around with bags of goo, DNA sweets and all sorts of other goodies that were being given out. There were people extracting DNA from peas, and racing plankton (won by our very own Prof Dan Parsons) or even racing over a magnetic elevation track. Lots of fun was had by all and I'm looking forward to next year. If you attended the festival, why not leave a comment below about what you enjoyed most or what you would like to see in the future?

For more pictures, follow this link to the official Science Festival gallery.

Whilst I was writing this post, as part of a ongoing series of elaborate April Fool's gags from Google (which has seen me collect all 150 Pokemon and desperately search for Mew), one of the photos used got "Auto-Awesomed". The result was too good not to share. 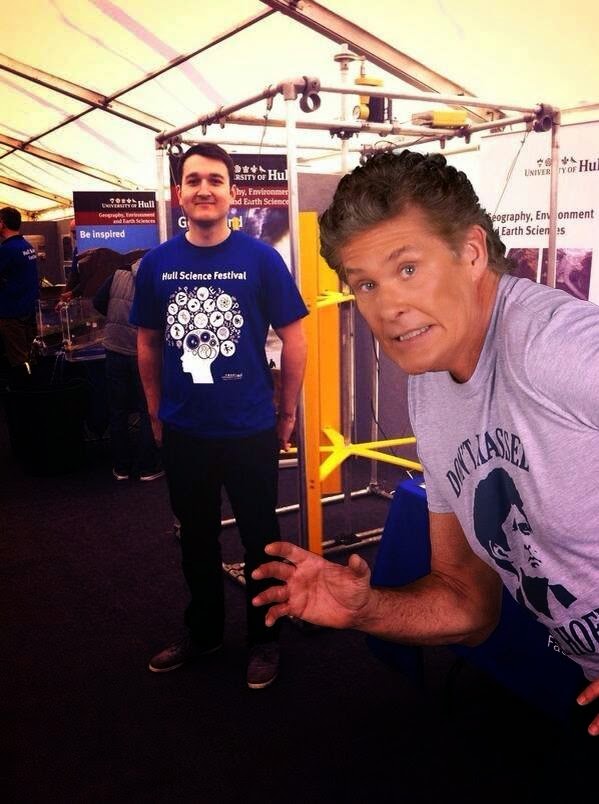