Freshwater limestones and the salt budget of the Mediterranean Sea


Freshwater limestones and the salt budget of the Mediterranean Sea have as much to do with each other as a hookah-smoking caterpillar does with a baby capable of turning into a pig. In both cases, the link could not be more simple; they both exist in the same storyline, the former case being my research career and the latter Alice’s Adventures in Wonderland. The caterpillar and the pig/baby are elements slowly manoeuvring Alice towards her showdown with the Queen of Hearts. Whether or not my career will end up with me in court, we are yet to see.

Freshwater limestones and the salt budget of the Mediterranean Sea share a fundamental characteristic - they are both essentially controlled by a single equation; the Froude equation. The Froude number (Froude is pronounced “Frood”, as in “sass that hoopy Ford Prefect, there’s a frood who really knows where his towel is”) tells you whether water flowing through a gap is moving slowly enough that waves can go through the water in the opposite direction to the flow, or not. You’ve probably seen the impact of the “hydraulic jumps” that form because of transitions between these two states – think back to the last time you were gazing at a waterfall. Remember how the water pours over in a sheet? That water has a Froude number that is “super-critical”. The water that seems to be boiling and upwelling downstream of the waterfall is “sub-critical”. The strange “standing wave” that seems to dance at the foot of the waterfall is a “hydraulic jump” between these two states. There is another one just above the waterfall, but you need a bit more practice to notice that.

The waterfall analogy works well for us, because freshwater limestones do in fact make waterfalls. These beautiful sediments form when calcium and carbon in the river water react to form calcite – limestone – to make crusty lumps and sheets on the river bottom. They are beautiful, by the way. Here are a few pictures if you don’t believe me (Images © Mike Rogerson). 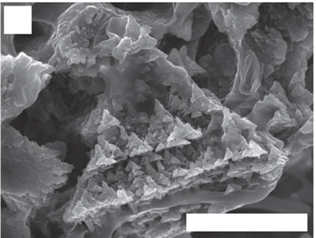 The calcite forms inside a community of microorganisms living on the bottom of the river – a biofilm. The way the river water, the biofilm and the calcite interact is one of the wonders of nature, with implications for the global carbon cycle, the evolution of life on our continents, the way we can reduce the impact of metal pollution on our waters and the future of oil production in the south Atlantic. Not even Lewis Carroll tried to convince us to relate such apparently unrelated scenes. The world is a strange and unpredictable place, and anyone that tells you that you can understand it intuitively is not to be trusted.

What controls the rate of calcite formation at the river bottom is mostly how fast you can get calcium and bicarbonate ions from the river to the bottom, and how fast you can get the protons produced by the mineral formation (Ca2+(aq) + HCO3-(aq) ⇌ CaCO3(s) + H+(aq)) back out into the river. This happens by diffusion, which is a really slow process in water. If you don’t believe me, gently pour a kettle of boiling water into the middle of a completely still, cold bath, leave it for 10 minutes and then try and find it with your hand. You should have no problem.

The distance the diffusion of the ions in the river have to travel is controlled by the still layer that sits at the bottom of all flowing waters. If the water is moving slowly, this still layer is thick. If the water is moving fast, it is thin – but it is there. If the water is moving super-critically, it is very thin indeed – and therein lies the rub. The calcite will form much faster on the top of our waterfall where the flow is super-critical than it will upstream or downstream. This is actually good news for the biofilm; their economy is driven by photosynthesis, which needs light. The light hitting the river bottom is stronger when the water layer is thin, and also when it is super-critical. The bigger the waterfall gets, the happier the biofilm is. The consequence of this is that the waterfall gets higher, the biofilm gets happier, the Froude number gets higher and the waterfall gets higher again. And look how high some of these things get. These whole walls have been built by a biofilm precipitating a mineral from water, exploiting the physics of how water flows. You’ve got to be impressed.
If you have super-critical flow of water through a sea-strait, then the amount of water you can push though per second is controlled by the friction on the sea floor. A good example is the shallow and narrow Strait of Gibraltar at the western end of the Mediterranean Sea. You can see the standing wave on the eastern side of the Strait – I hope that is convincing enough that there is a Froude transition happening in there. If you have a region - like the Mediterranean Sea - which is pretty dry, then the total amount of evaporation is a bit bigger than the amount of rainfall. Because you can’t just pour as much water as you like through the Strait of Gibraltar, this means the Mediterranean is a bit saltier than the Atlantic. So long as sea level stays the same, this balance is maintained. If you reduce sea level though, the Gibraltar gap gets smaller, it gets harder to push water though it and salinity in the Mediterranean gets higher. Vice versa if you raise sea level – the Mediterranean steadily gets more and more similar to the Atlantic.
24,000 years ago there was an ice sheet on Britain. Its probably what you call the “ice age”, but really you should call it the “last glacial maximum”. You can tell these glaciers were there though, because we have lovely glaciated valleys in the North of Britain, stunning fjords in the west of Scotland and you can see moraines (which formed at the southern ends of the ice sheet) all over eastern Yorkshire. There were also ice sheets in North America, Scandinavia, Kamchatka, Iceland and other places. And all the water to make these ice sheets came out of the ocean. All that water removed from the ocean was enough to drop sea level by 120 to 130m. For the Strait of Gibraltar, which today is about 245m deep, this means the bottle-neck got an awful lot smaller. The Froude number was even higher than today, and it was even harder to balance the Mediterranean salt budget.

The fact that water in the Mediterranean was a lot saltier than today during the last glacial maximum is not an obvious consequence of growing ice sheets in Britain and elsewhere. But the consequences of climate change are rarely obvious and intuitive. But what the Froude controls on freshwater limestones and Mediterranean salinity tell us is that features of the natural environment can be predicted by mathematics, even if they are completely impossible to relate without that tool. It probably is no accident that Lewis Carroll was a mathematician – he was used to following internal logic without worrying that it told him things outside his everyday experience. He knew that the world is always more complicated than it seems on the surface.
So the message we should all take home is that if mathematics tells us that raising CO2 in the atmosphere is not a great idea, then we should pay attention. Maths does a much better job of predicting the world than our experience-based guesswork ever can. The mathematics for climate change were worked out in the 1900’s, and the first prediction of climate change was made by an equation – not by a model – in 1908. Look up SvanteArrhenius’ “Worlds in the Making”. It may not seem obvious from your everyday life that climate change must be true, but neither is it obvious that biofilms make waterfalls. Nature works in mysterious ways.