Dr Hannah Williams has been a Post-Doctoral Researcher in Physical Geography at the University of Hull since April 2017. Hannah is part of the Hydralab+ project, a large European project that brings together researchers to improve experimental hydraulic research to better address climate change adaptation issues. Here she talks about a recent set of experiments carried out at the Total Environment Simulator.

Mixed Sediment Beaches are commonly found at high latitudes around the world, including amongst other locations, along the coastline of the United Kingdom. These types of beaches can consist of a mixture of both sands and gravels, and behave differently under hydrodynamic forcing, such as waves, to those made up of a single sediment size. Although some research, mainly in the 1970s-1980s, has been carried out to gain an understanding of the morphological behaviour of these types of beaches, little is still known about the variations in the morphology of these beaches due to mixed sediment, and how they respond to the hydrodynamic conditions.  The aim of this study was to try and gain some insights into beach response using a physical model.

At the University of Hull, we are lucky that we have a large experimental flume available for research called the Total Environment Simulator (TES). The TES has a working area of 11m by 6m, and is equipped with pumps to allow recirculating flow and sediment, a multi-paddle wave generator for the generation of both regular and irregular waves up to ~0.3m in height (depending on water depth), and finally is equipped with a rainfall generator sprinkler system on the roof. During my time at the University of Hull, I have been involved in experiments using all of these systems, demonstrating just how versatile the flume is. The photo below shows the TES when it first opened in 2000. As a well-used facility, it doesn’t look quite so clean anymore! 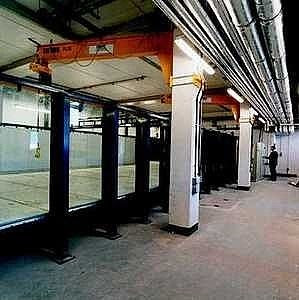 For these particular experiments we were only interested in the beach response under wave loading, so only the wave generator system was required. We constructed a large beach across the opposite end of flume, with a height of 0.8m at the rear, and extending 5m towards the wave paddles. This gave the beach an initial gradient of 1:7.5.To obtain a mixed beach, we chose two different sediment sizes with a large difference in diameter. The fine sediment had a D50=215μm (often known as play sand as it is commonly used in children’s sand pits), whilst the coarser sediment had a D50=1.6mm. To construct this beach, this required over 5 tonnes of each type of sediment (and this including bulking out some of the area deep underneath the beach with breeze blocks), which all had to be lifted into the flume and distributed by hand. The photo below shows the initial smooth beach conditions. 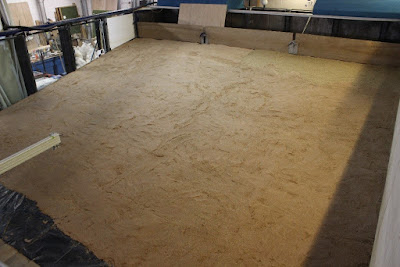 In terms of measurements, there were two main parameters we were interested in, firstly the incoming wave conditions. To measure these, we had 8 acoustic wave gauges distributed throughout the flume (see below). These recorded information about the wave heights and periods, from which we can gain an understanding of the transformation of the waves as they approach the beach. 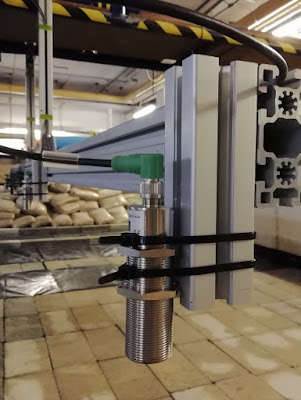 The second parameter we were interested in was the beach morphology. To measure this, we deployed a Terrestrial Laser Scanner. This was mounted from the ceiling above the beach. After each experimental run, the water was drained from the flume, and the scanner carried out a full 360 degree scan of the beach surface.The image below shows an example of a TLS scan, in which you can clearly identify the top of the swash zone, as well as a berm which has formed part way down the beach, and ripples in the lower section. 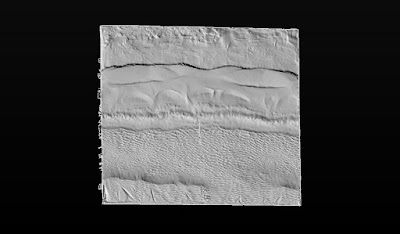 For the actual experiments carried out here, we attempted to replicate some of the influence of the tidal cycle on the response of the beach. The experiments were run at three different water depths, namely 0.3m, 0.4m and 0.5m. In three of the experiments, we hit the beach with an initial storm (H=0.18m, T=2.2s, where H is wave height and T is wave period), at different points in the tidal cycle. One at high tide, then one at mid-tide on the flood tide, and one at mid-tide on the ebb tide. The purpose of this was to try and investigate the effect that timing of the storm with relation to the tidal cycle has on the beach response. After each storm a number of recovery events (H=0.10m, T=1.5s) were carried out, at each depth to complete a tidal cycle. The video below shows some of the experiments in action.

Using the laser scans, we can also examine the differences between scans, giving us an idea of the evolution of the beach throughout the experiments. From these we can obtain information about the amount of erosion and accretion at different points of the beach, and examine if this is different depending on when the storm occurred. The image below shows an example of a Digital Elevation Model of Difference, from which a number of interesting observations can be made.  It should be noted that Red shows accretion of sediment, whilst blue shows erosion of sediment. 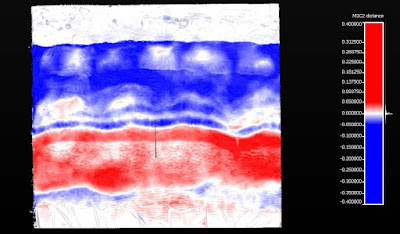 The very top of the beach remains white, this shows that the beach level here remains constant throughout the experiments, due to the wave run-up not reaching this point. Just below this section is a large area of erosion, this is the swash zone, where waves are breaking. This is a very energetic area which results in a large amount of sediment transport, mainly transported further down the beach to the zone showing large accretion. This is known as a berm and often forms as the wave deposits sediment. Below this area, it can be seen that ripples form. This is prior to the wave breaking where sediment movement occurs in an elliptical motion, forming small ripples on the surface. These are all features that are not unique to mixed sediment beaches, however, one feature that is, are the beach cusps. These can be identified in the figure by the regular arc shapes present. There is limited information on the origin of beach cusps, but once they have been created they are a self-sustaining formation. This is because as a wave hits the area of the beach with the cusp, it splits at the point and the water is forced either side. As the wave then breaks, the coarser sediment falls out of suspension and is deposited on these points (known as horns), whilst the water flows into the arc (also known as an embayment) where it in turn erodes out the finer sediment.

These experiments have only just finished, so analysis of the results is still on-going, but hopefully we will have gained some useful insights into the behaviour of mixed sediment beaches which can be used to help devise beach management plans in the future.

For more information on the work of the Hydralab+ project, then please visit: https://hydralab.eu/
Posted by Jonathan Dean at 19:49