Let's get serious... and game!

Writing this blog post comes at an exciting time for me. I've been working on a project called 'Humber in a Box' with a group of student developers from SEED (a software development group at the University of Hull), and it is going to make its debut at the Hull University Science Festival this coming weekend. Humber in a Box represents a start for me at looking at using gaming technology and ideas to better communicate research, and I am going to use this post to explain the ethos behind this. 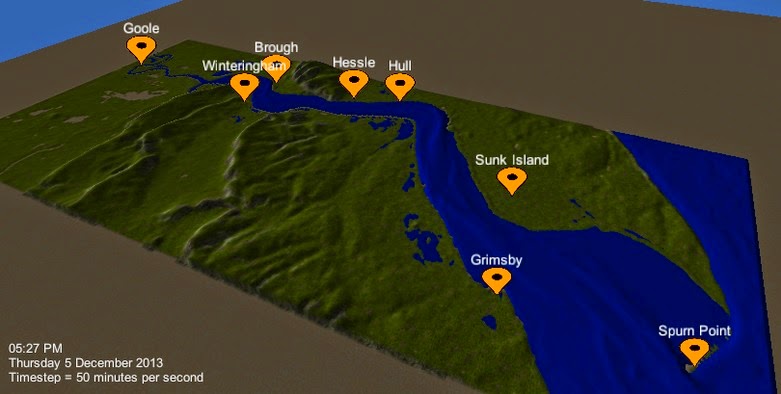 Early development shot of Humber in a Box

Think of gaming, whether on a table, a board or a computer, and you probably won't think about learning. After all, games are supposed to be fun, they're supposed to be entertainment. Learning is not often portrayed as fun, although us academics would take you to task on that. These two things, entertainment and learning, are seldom thought of together outside the use of jargon, like info-tainment or edu-tainment, and things that tend to use these labels are also seldom both.

It is my belief that games can be different, and as Geographers we can use gaming as a tool to educate and to communicate our science. What a game can do, which almost no other medium can, is put a person in the shoes of someone else, place them in a situation (metaphorically) where they have to react or behave in a way they would not normally have to, and through this experience a new dimension to a problem or issue.

For instance, a simple game to run in a classroom would be a debate where opposing sides have to assume certain roles. One I ran recently involved a debate about hydraulic fracturing, or "fracking", and split the group in three. Group 1 were to be the developers, who wished to explore the shale gas reserves beneath our Geography Department; Group 2 were an environmental pressure group determined to put a stop to this; and Group 3 were those in the Geography Department who would make the decision. Groups 1 and 2 were armed with the same crib sheet of basic facts and some case studies, and each group was given 30 minutes to discuss and research, before Groups 1 and 2 presented their case. 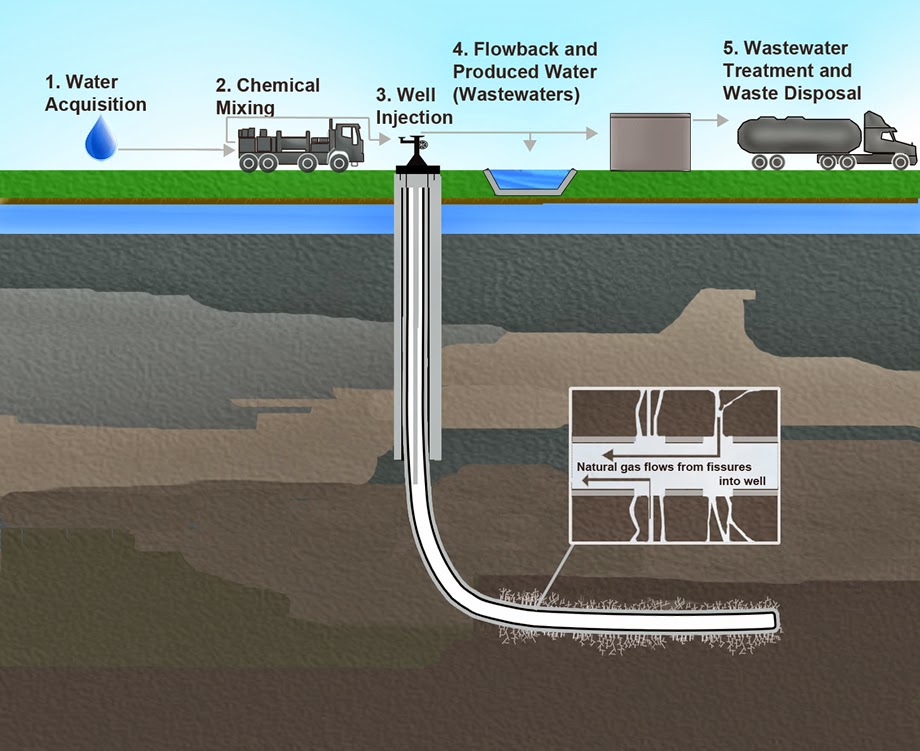 Hydraulic Fracturing, or Fracking, is a controversial practice ideal for classroom debating games (image by US Environmental Protection Agency).

Despite the best efforts of Group 1 to reassure the decision makers, Group 3 voted unanimously against the development. This was also against the group's general support of hydraulic fracturing outside of the game. The purpose of the game was to show that a contemporary issue like this requires both a Human and a Physical Geography response to fully understand it, and how researchers from both need to engage with it and work together. It also highlighted the difficulties of communicating science and research in a live, ongoing debate with many emotive issues also going on (often of far greater importance to the members of the public involved).

The above example is a very quick and simple game that is often used (often without the realisation that what is going is in fact a game), and it is those same principles that can be taken forward and combined with modern and emerging technologies to create something more powerful.

This could be a physically constructed object, like the 'River in a Box' that we have at the University of Hull. This table is boxed and filled with sand, with water pumped into the top allowing it to flow over the surface and down the slope. It is a miniature version of the big flumes used in physical modelling experiments, such as the Total Environment Simulator at The Deep. As the water flows it erodes the sand and produces channels, like a river, only smaller and quicker. On this you can place model houses and let people model defences, or artificial channels, with their hands. It is a very simple, yet very effective way of communicating various aspects of river science, such as geomorphology, flooding and erosion.

There is so much that can be done by tapping into the potential of computer gaming. The gaming industry is worth £59bn worldwide, which is more than the music and film industries, and it is still growing rapidly. It is massive business and it has a huge user base. It should be obvious from the popularity of games like SimCity, Civilization and Minecraft that there is an appetite for games with a learning angle, if they are done correctly. 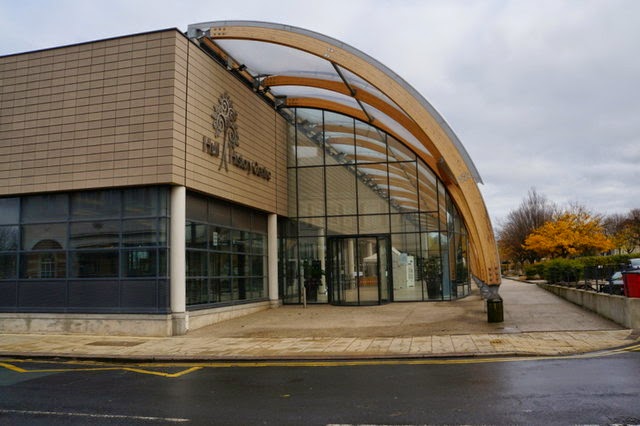 Researchers at Hull are already on the curve when it comes to Minecraft. The HullCraft project, run by the University and Hull History Centre, in particular Joel Mills and Hannah Rice, looks to rebuild some of archived architectural plans in the History Centre within the Minecraft engine by enlisting the help of users, many of them young. People take part as it is enjoyable and they can earn badges to display on online profiles, but they learn about the history of Hull and about architecture as they do so.

This is why I started SeriousGeoGames (SGG). I'm not sure what it is just yet, a project I guess is the closest word. I'm not even sure that this rather dull, yet descriptive, name will be its final moniker. It is, however, a medium I am using to explore the potential of modern gaming technology, and other cool pieces of tech, to be turned to a good pedagogical (posh word for teaching style) use. It is very early days, but the first project is underway working with a group of student developers from the University of Hull's software development group - SEED. 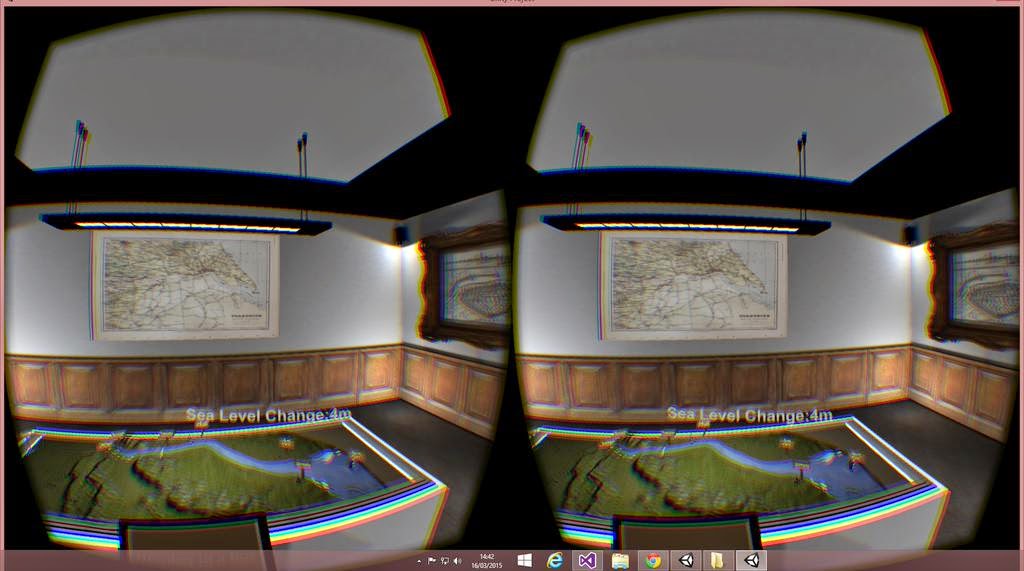 Screenshot of Humber in a Box

The project is named 'Humber in a Box' and is using our CAESAR-Lisflood model of the Humber Estuary and placing within the Unity 3D gaming engine. Via an Oculus Rift virtual reality headset, the user is put inside the model viewing the topography of the surrounding area in three dimensions, and has the ability to fly around using an Xbox controller. In the background the model is calculating the tides within the estuary and graphically displaying these. To help communicate the dangers of future sea level rises without investment in flood defences, there is an option for the user to increase the water levels up to whatever level they like - but it gets very wet after 5 m! The science behind this is based on the paper featured in this previous blog.

All these cool toys are great but the danger is that they don't transcend that to become more than just toys. The ethos of SeriousGeoGames, whatever becomes of it, will be the communication of the science and research that went into making it. I hope this has given you some introduction to the use of gaming in science and learning - I'm not claiming that this is anything overly new or innovative that I have come up with (not by a long shot!), so, with that in mind, below is a blog roll and twitterati of interesting things to follow (please feel free to comment and suggest others that should make the list -