Our final 'WOW GESS woman' is Professor Dame Judith Rees. She was Professor of Geography at the University of Hull from 1989-1995, during which time she was also Dean of the School of Geography and Earth Resources (as it was then) and subsequently Pro-Vice Chancellor. This followed a BSc in Economics and MPhil from LSE, and a PhD from the University of London, undertaken whilst an assistant and subsequently lecturer at LSE. After her time in Hull, Judith returned to LSE, where she has held a number of senior leadership roles including directing environmental research institutes and served as Interim Director of the London School of Economics 2011-2012. Judith is currently Vice Chair of the Grantham Research Institute on Climate Change and the Environment and is the first female President of the Royal Geographical Society. 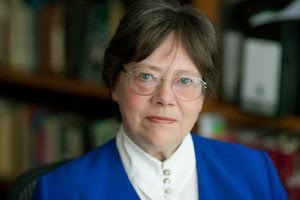 Although a relatively brief interlude in a long and distinguished career, Judith’s time in Hull has had a significant and ongoing impact on her subsequent career. Her research has focused on environmental issues, including the management of water resources, environmental risk and adaptation to climate change. Coming from a social science background, it was Judith’s experience in Hull’s Geography department that afforded the opportunity to work with academics researching the physical science aspects of environmental issues. Notably, Judith says that this was her 'first encounter with people discussing and working on climate change, not insignificant to my future career'.

Hull awarded Judith her first Chair, making her the first female Professor of Geography at Hull. Sadly, after 20 years, we have only just appointed our third female Professor of Geography. Judith was the first and so far still the only female head of department. That leadership role, followed rapidly by a PVC appointment, unusually for the time, was supported by management training. 'At Hull', Judith recollects, 'I learnt an immense amount about dealing with people, making hard decisions, learning to compromise and trying to be transparently fair. This Hull experience was very important not only in being invited to become Pro-Director at LSE (first woman) but also to doing the job itself. So Hull formed the basis of my subsequent administrative career'.

A third aspect of Judith’s career has been working closely with government and non-governmental bodies.  She comments that she 'will also always be grateful for the way that the University allowed me to work one day a week for OfWat (the economic regulator for the privatised Water Industry). Long before the impact agenda hit us all Hull understood the importance of academics engaging with practitioners. The OfWat experience then led to the Monopolies and Mergers (then Competition Commission) and subsequently to being on the Technical Advisory Committee of the Global Water Partnership and then The UN Secretary Generals Advisory Committee in Water and Sanitation'.

Judith’s contribution to environmental research, engagement and university leadership has been recognised by the awarding of an honorary Doctorate from the University of Hull in 2012, and being made a Dame in 2013.