by Jane Bunting and Michelle Farrell

Today's 'WOW GEES Woman' was never employed as an academic or a researcher, but she still made a substantial contribution to her field.  Florence Eva Crackles was born in Hull in 1918, studied Botany, Zoology and Mathematics at the University, and became a school teacher, rising quickly to Head of Biology at Malet Lambert High School in Hull, a position she held until her retirement in 1978.  She carried out botanical research in her spare time, working with Professor Ron Good (a Plant Geographer who was Professor in Botany at the University of Hull 1928-1959) and making substantial contributions to his Atlas of the British Flora.  She also published extensively in her own right, authoring over 90 published articles, and completed an MSc (Hull) in 1978 on the taxonomy and biosystematics of the populations of the grasses Calamagrostis stricta and C. canescens and their hybrid offspring found along the Leven Canal. 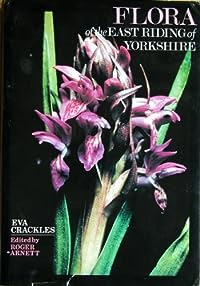 Her major work, the Flora of the East Riding of Yorkshire, was published by the University of Hull press in 1990.  This represented over 40 years work by Eva and many other enthusiastic local natural historians (many of them introduced to the subject by Eva, who as Vice-County recorder for the Botanical Society of the British Isles for East Yorkshire ensured that the highest of taxonomic standards were upheld in the area), and contains many maps produced by members of what was then the Geography department showing not just plant distributions but their relationships to the physical geography of the county.  This book is still a very important resource for amateur and professional ecologists alike.


Eva's contribution to natural history extended well beyond her own published work.  She was also a major contributor in what we might now call "outreach", both as an active member of organisations such as the Hull Scientific and Field Naturalists’ Club and the Yorkshire Naturalists’ Union, through teaching evening classes for the Workers’ Educational Association and via writing the Crackles Country column for the Hull Daily Mail.  Becoming largely wheelchair bound in later life did not stop her enthusiasm for field work; her obituary in the Linnaean Society Journal Watsonia was written by her "honorary wheelchair-pusher", Peter Cook, who accompanied her on many field visits.  Her scientific contributions, her lifetime of teaching and her major contributions to natural history were recognised by an honorary doctorate from the University of Hull in 1991 and an MBE in 1992.

On her death on July 14th 2007, she left generous bequests to both the University of Hull and the Yorkshire Wildlife Trust.  The bequest to the University supported the "Crackles Bequest Project" (2010-2013), investigating relationships between plants and climate across northern Europe, on which Jane Bunting was the academic lead and Michelle Farrell the post-doctoral researcher, and we will be blogging about the findings here as we write them up, taking extra care with our taxonomy in honour of Eva's lasting contribution to generations of Yorkshire natural historians, to biogeography as a discipline, and to the University of Hull.